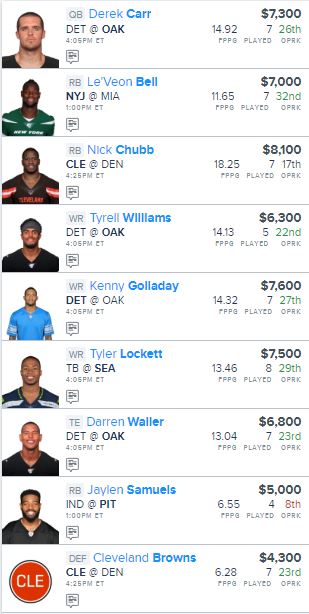 It’s Sunday everyone which means we have a ton of NFL action today!

Let’s kick off our day as we take a look at our NFL FanDuel “Main Slate” Lineup that features 10 games and starts at 1:00pm!

Starting off with our lineups today, we’re going right to an Oakland Raiders stack as I love their match-up at home against the Detroit Lions.

The Lions have struggled against both the pass and the rush, however, we’re hoping that Oakland does most of their damage through the air as we’re going with a stack of Derek Carr, Tyrell Williams, & Darren Waller.

We’re going with three RB’s today as we’re paying up for both Le’Veon Bell & Nick Chubb while getting some great value out of Jaylen Samuels who should see the majority of the snaps out of the Pittsburgh backfield with James Conner not available.

We’re paying for our other two WR’s spots as we want to see a high scoring DET/OAK game, we’re going with Detroit’s Kenny Golladay against a questionable Oakland secondary while also fitting in Seattle’s Tyler Lockett agianst a Tampa Bay defense that has allowed 14 passing TD’s on the season.

For our defense, I love the Cleveland Browns on the road agianst a Denver Broncos team and Brandon Allen who will be making his first NFL start. Myles Garrett could be in for a huge day!