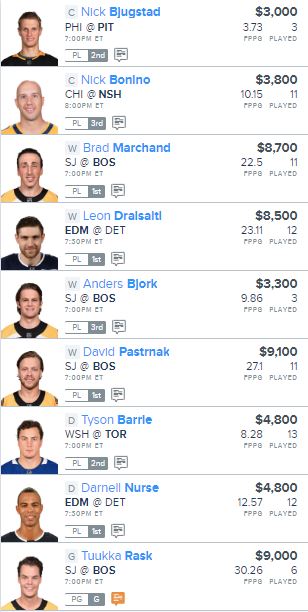 We’re spending up on the Bruins tonight as we’re going to roster Brad Marchand, David Pastrnak, Tuukka Rask, & go with some value in Anders Bjork.

The Bruins and their top line have been outstanding this season and that should continue agianst a San Jose team that is allowed 3.58 goals/game this season and have allowed at least 4 games in each of their last 4 road games.

Rask should be able to pick up a win tonight in this good match-up and I like the value that Bjork brings as he has been solid in his three games since joining the team.

We’re paying up for Edmonton’s Leon Draisaitl who has 3 goals and 2 assists over his last three games and is averaging 23.1 FanDuel points per season.

We are going with some value with Nashville’s Nick Bonino as the Predators are averaging over 4 goals per game this season and Pittsburgh’s Nick Bjugstad who is currently a steal at minimum price while playing on the Penguins 2nd line.

For our defenseman, were going with Toronto’s Tyson Barrie & Edmonton’s Darnell Nurse.