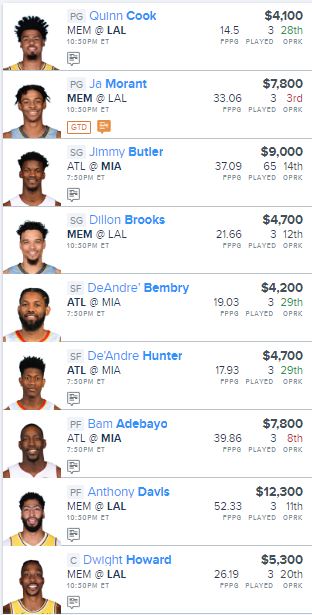 For Miami, we’re going to pay up for both Jimmy Butler & Bam Adebayo.

Butler will be making his season debut tonight and all reports are showing that he won’t be limited in anyway. Butler is the star of this team and as I think that might be some hesitation from others to roster him immediately, I’m going to pay up for the superstar and things he delivers a 50+ outing tonight.

It’s going to see how Butler presence effects some of the other backcourt players for the Heat, however, as I don’t think it will have any effect on Bam Adebayo, I like the big man in this match-up agianst the Hawks tonight.

For the Hawks, we’re going to go with some value in both DeAndre’ Bembry & De’Adnre Hunter who I think will see plenty of minutes tonight as Evan Turner is doubtful and I imagine the Hawks are careful with Kevin Huerter on the 2nd half of a back-to-back.

We’re going with a 3-man stack of Los Angeles Lakers tonight as we have some solid value with Quinn Cook & Dwight Howard and paying up for Anthony Davis.

The Lakers have the 2nd highest implied team total tonight at 115 as the Grizzlies are playing at a better pace than we’re used to and I think Anthony Davis is going to have his first huge game of 70+ FanDuel points.

For the Grizzlies, you have to like Ja Morant in this spot after coming off a monster 48.3 FanDuel point performance and I think Dillon Brooks has great value at just $4,700 after playing an average of 33 minutes over his last two games.