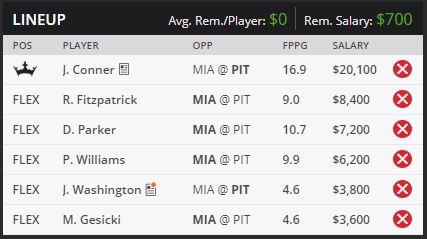 We had a solid DraftKings lineup for Sunday Night Football which had us cashing and I’m going right back to another GPP lineup tonight in the DraftKings “Monday Night Showdown” slate that features the Miami Dolphins taking on the Pittsburgh Steelers.

DON'T FORGET TO CHECK OUT OUR GPP LINEUP FOR THE FANDUEL NFL "MONDAY NIGHT SPECIAL" TONIGHT!!!

If I was doing a cash lineup, we would be loading up on four Pittsburgh players and going with a Dolphins WR, however, as this is going to be a GPP lineup, we’re actually going to have some decent exposure to the Dolphins.

For the Steelers, we’re still going to pay up for James Conner and put him in our MVP slot as the match-up against the Dolphins rush defense is too good to pass up.

We’re also going to go with James Washington and hope that he can recreate some of the big play ability that he showed with Miles Rudolph at Oklahoma State.

For the Dolphins, I was actually surprised with the offensive success they had agianst the Buffalo Bills last week and don’t mind taking a chance with Ryan Fitzpatrick and a trio of his receivers in DeVante Parker, Preston Williams, & Mike Gesicki.

Parker seems to be Fitzpatrick’s favorite target and is coming off a game seeing 10 targets.

Williams has some great big-play upside and also so a bunch of targets last week while finishing with 6 receptions for 82 yards!

Gesicki has seen 11 targets over his last two games (7 catches, 92 yards) and I think he is a sneaky play tonight agianst a Pittsburgh team that has really struggled against TE’s.

Overall, we’re hoping that the Steelers go with James Conner a bunch with a hopefully a big TD pass play to Washington and that Miami and Fitzpatrick pile up the passing stats while fighting back into the game!