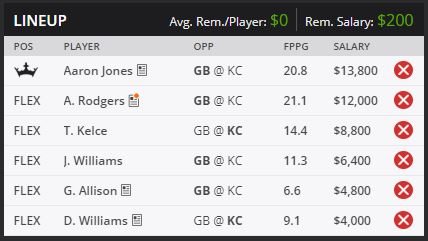 Hope everyone is enjoying their Sunday!

For our lineup tonight, I think the Packers get out to a lead early and we’re going to see plenty of both Aaron Jones (MVP) & Jamaal Williams. I think both could be in for big games as Kansas City’s defense has been pretty much non-existent as they rank 30th in the NFL in rushing yards allowed & 29th in rushing TD’s allowed.

Even though we’re going with the Packers ground game, we’re not fading Aaron Rodgers as although I don’t expect a repeat performance from what we saw him do agianst the Raiders, I still think he has a solid game and I like the he often includes both Jones & Williams in the pass game.

Geronimo Allison has been solid for the Packers this season and as I think he has great value at just $4,800, I like him on DraftKings tonight.

As I think the Chiefs will be playing from behind, I’m going to go with Travis Kelce & and their pass catching RB in Damien Williams.