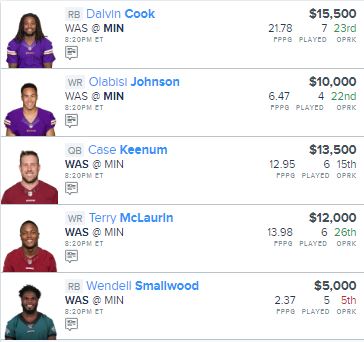 It’s Thursday which means we have some NFL action tonight!!!

Let’s take a look at our lineup for FanDuel’s “NFL Thursday Night Special” that features the Washington Redskins taking on the Minnesota Vikings.

I’m going to be doing more of a GPP lineup tonight.

I’m hoping for a game script in which Minnesota takes a big lead early behind Dalvin Cook (MVP) and hopefully a TD to a lesser owned Olabisi Johnson who saw 8 targets last week and should see plenty of action with Adam Thielen not available.

Kirk Cousins & Stefon Diggs are going to be highly owned, however, I can see Cousins having just an average game if the Vikings get up early and Diggs will have a tough match-up with Quinton Dunbar.

In hopes that Washington has to play from behind, I’m going to go with Case Keenum and pair him up with Terry McLaurin & Wendell Smallwood.

Keenum should be comfortable at U.S. Bank Stadium where he had some solid success with the Vikings and I expect a bounce back game from him tonight.