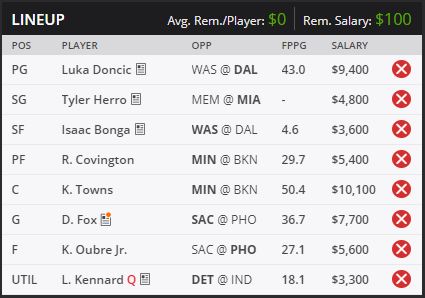 We got our first full-slate of NBA action tonight and let’s take a look at our DRAFTKINGS “Main Slate” lineup that features 11 games and starts at 7:00pm!

In the beginning of the season, I like to take some chances as while teams are figuring out how their minute rotations are going to work, it opens up some great value at near minimum pricing.

We’re going with some extreme value with three of our players tonight, as we are locking in Miami’s Tyler Herro, Charlotte’s Dwayne Bacon, and Detroit’s Luke Kennard.

Tyler Herro has the worse match-up of the bunch, however, with Dion Waiters suspended for the opener, Herro looks like he should see around 25 minutes tonight and was impressive in the pre-season averaging 14.2 ppg, 4.4 rpg, 2.0 apg, 1.0 spg. Herro is great shooter who shot 51.9% from beyond the arc & 88.0% from the FT-line and I think he easily hits value tonight.

Charlotte is in rebuilding mode this season and we’re going to see a bunch of opportunity for some of their younger players, including Dwayne Bacon. Bacon has already been listed as a starter for tonight’s match-up against Chicago and Bacon can chip in with rebounds & assists, I think he hits value tonight as I expect him to see 20-25 minutes.

Detroit will be without Blake Griffin tonight so they’ll need to get some scoring from some of their other role players. Luke Kennard has been solid in pre-season, averaging 11.5 ppg, 3.8 apg, & 1.5 apg and as although we have to confirm that he is going to play tonight (looks likely but currently questionable with knee soreness), he has great value at just $3,300.

With all the money we’ve saved, we’re able to spend up big at our other spots and we start in Dallas, as we’re going to pay up for Luka Doncic who is in a great spot agianst the Washington Wizards tonight.

Another great match-up to target tonight will be the SAC/PHO game and we’re going to make sure we have some action as we’re going with the Sacramento’s De’Aaron Fox & Phoenix’s Kelly Oubre.

Rounding out the team, we’re going to pair up Minnesota’s Robert Covington & Karl-Anthony Towns in their good match-up against the Brooklyn Nets.