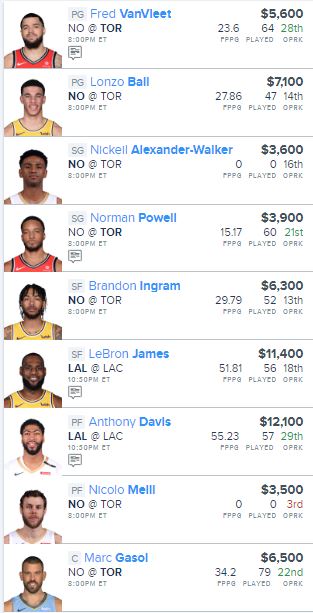 It’s the start of the NBA season tonight and we have two great match-ups to kick off our NBA daily fantasy season!

Remember, FanDuel is no longer dropping the lowest score!

Our main focus tonight is to get both Lebron James & Anthony Davis in our lineups!

This should be a competitive match-up against the Clippers, even if they don’t have Paul George to start the season, and as I expect the Lakers to want to make a statement in their season opener, especially after having such a disappointing season last year, I think we see James & Davis get a ton of minutes and easily hit value even at their high prices.

As we’re paying up for both James & Davis, we are obviously going to have to find some value and we’re basically going to be stacking both teams in the NO/TOR game.

VanVleet & Powell will now see consistent minutes with Kawhi Leonard now with the Clippers and both come with great value in what should be a fast pace match-up against the Pelicans.

Marc Gasol should see his offensive numbers go up a bit as he’ll be more relied upon tonight and I like his individual match-up agianst the likes of Derrick Favors & Jahlil Okafor.

For the New Orleans Pelicans, we’re paying up a bit for Lonzo Ball & Brandon Ingram and go with some value in Nickeil Alexander-Walker & Nicolo Melli.

Ball & Ingram I’m sure are excited to start a new chapter in their NBA careers and with Zion Williamson currently out, I think the usage rate for both of them will be high tonight.

Alexander-Walker was absolutely outstanding in the preseason, averaging 16.2 ppg, 4.1 rpg, & 4.0 apg and I think will Williamson out, has earned probably about 15-20 minutes of playing time. In what should be a high-scoring game, I think he’ll hit his value tonight.

Nicolo Melli will be able to stretch the floor for the Pelicans with his ability to knock down the three-pointer and similar to Alexander-Walker, he should see plenty of minutes to hit value with Williamson out.