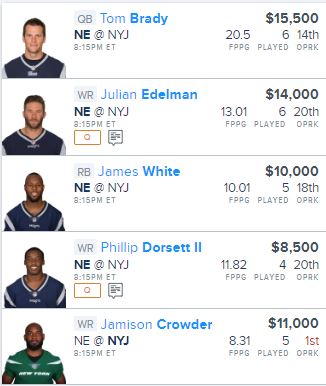 Hope everyone is having a great start to their weeks!

Let’s get our DFS week off on the right now as we take a look at tonight’s FanDuel “NFL Monday Million” Slate that features the New England Patriots taking on the New York Jets at 8:15pm!

DON’T FORGET TO CHECK OUT OUR LINEUP FOR THE NFL DRAFTKINGS “MONDAY NIGHT SHOWDOWN” LINEUP!!!

For tonight’s lineup, we’re going heavy with the Patriots. I think this game does have potential to be a close game, however, as we can’t take defenses in FanDuel, I think the play here is to still load up on the Patriots.

For the Patriots, I’m going to put Tom Brady at our MVP slot as he had no trouble figuring out the Jets defense in the Patriots 30-14 victory at home in Week 4 as he completed 28 of 42 passes for 306 yards & 2 TD.

To go along with Brady, we’re pairing him with three of his favorite targets in Julian Edelman, James White, & Phillip Dorsett II.

For the Jets, although Donald looked good last week, the Patriots will once again focus on taking Le’Veon Bell out of the game. For my one mandatory Jets player, I’m going with Jamison Crowder as he has the best match-up against the Patriots secondary in Jonathan Jones and has been targeted an incredible 26 times in the two games in which Sam Donald has started.

Don’t forget to follow me on Twitter (@BrettCU05) as this is the best place for me to make any last-minute updates/changes to the lineup!