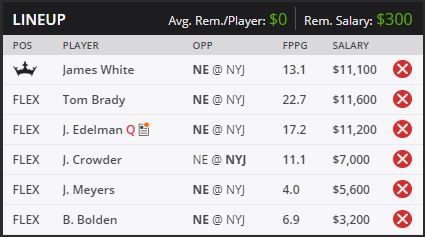 Hope everyone is having a great start to their weeks!

Let’s get our DFS week off on the right now as we take a look at tonight’s DraftKings “Monday Night Showdown” Slate that features the New England Patriots taking on the New York Jets at 8:15pm!

DON’T FORGET TO CHECK OUT OUR LINEUP FOR THE FANDUEL “NFL MONDAY MILLION” LINEUP!!!

For tonight’s lineup, we’re going heavy with the Patriots. I think this game does have potential to be a close game, however, as we can’t take defenses in FanDuel, I think the play here is to still load up on the Patriots.

For the Patriots, as I want to be able to pay up for both Brady & Edelman, I’m going to go with James White at my MVP slot. White will see plenty of action in the passing game tonight as the Jets have been terrible defending the pass out of the backfield and with Josh Gordon out, I think it will just open up more opportunities for White.

We’re going heavy on the Patriots with our remaining slots, as we are paying up for both Tom Brady & Julian Edelman and going with some more value in Jakobi Meyers & Brandon Bolden.

For the Jets, although Donald looked good last week, the Patriots will once again focus on taking Le’Veon Bell out of the game. For my one mandatory Jets player, I’m going with Jamison Crowder as he has the best match-up against the Patriots secondary in Jonathan Jones and has been targeted an incredible 26 times in the two games in which Sam Donald has started.

Don’t forget to follow me on Twitter (@BrettCU05) as this is the best place for me to make any last-minute updates/changes to the lineup!