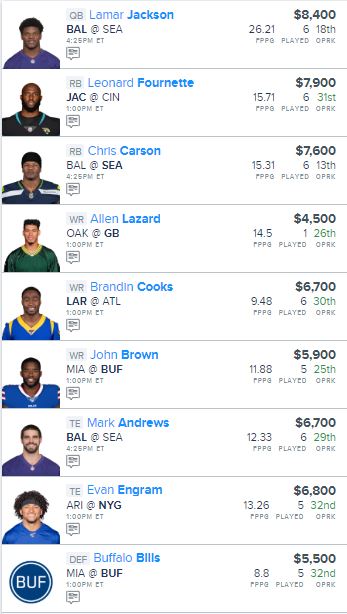 Let’s start it off by taking a look at today’s NFL FanDuel “Main Slate” that features 11 games and starts at 1:00pm.

We have a lot of solid options at QB today (Goff, Ryan, Allen, Jones…etc.) which I think opens up a nice opportunity to pay up for Lamar Jackson who might not as be as high owned as we’ve seen in the past week. I’m not intimidated by the Seattle defense, even at home, and I think Jackson will have success in both the running and passing game, I can see another 30+ performance today.

Pairing with Lamar Jackson, I’m going with his favorite target in TE Mark Andrews who is averaging about 8 targets per game and has a great match-up against a Seattle team that hasn’t fared well agianst the TE position.

Leonard Fournette has seen about 24 rushing attempts over the past three weeks and also has become a major part of the passing game as he has seen at least 6 targets in all but one game this season. Fournette could be in for a big game agianst a Cincinnati defense that has been terrible agianst the run.

Chris Carson has been an absolute workhorse for the Seahawks and has topped 100 yards in each of his last three games. Baltimore’s run defense has showed it can allow yards (i.e. Nick Chubb) and I think Carson plays a big part in what I think will be a high scoring game.

We needed to get some action to the Rams and going with some value with Brandin Cooks. Cooks has the speed for a big play which their should be plenty of opportunity agianst the Falcons secondary.

We have some solid value at the other WR spots in the Packers Allen Lazard & Buffalo’s John Brown.

At our Flex position, we’re going with the Giants Evan Engram as he has the weekly dream match-up for TE’s agianst the Arizona Cardinals.

For our defense, we’re paying up for the Buffalo Bills who has a great match-up at home against the Miami Dolphins!