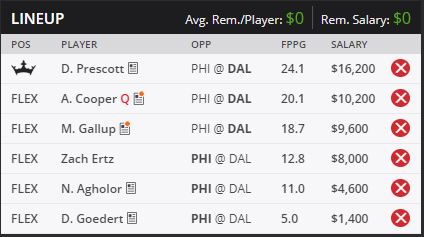 Hope everyone has enjoyed the Sunday NFL action.

Let’s take a look at our DraftKings “Sunday Night Showdown” featuring the Philadelphia Eagles taking on the Dallas Cowboys!

DON’T FORGET TO CHECK OUT OUR NFL FANDUEL LINEUP FOR THE PHI VS. DAL GAME!!!

The Cowboys have struggled as of late, however, you have to like their chances tonight to have success in the passing game against a Philadelphia secondary that ranks just 29th in passing yards allowed & 28th in receiving TD’s allowed (13)

For the Cowboys, we’re putting Dak Prescott at our MVP slot and pairing with his two most dangerous WR threats in Michael Gallup & Amari Cooper.

For the Eagles, as I think they’ll need to throw the ball to keep up with the Cowboys, I’m paying up for Zack Ertz and going with some value options in Nelson Agholor & Dallas Goedert.