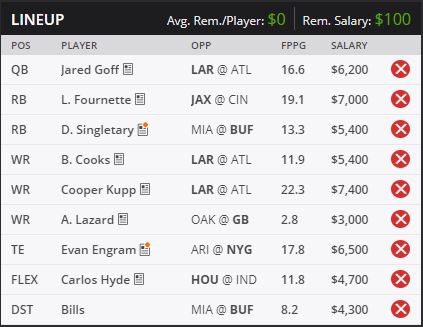 DON’T FORGET TO CHECK OUT OUR NFL FANDUEL“1:00 PM ONLY” LINEUP AND OUR "MAIN SLATE" LINEUPS FOR BOTH FANDUEL & DRAFTKINGS!

I’m keeping these writes pretty basic as I want to ensure I get as many lineups out for the various slates as possible!

We have Jared Goff, Copper Kupp, & Brandin Cooks against an Atlanta secondary that hasn’t been able to stop anyone this season.

At RB, we’re paying up for both Leonard Fournette & and taking a chance on Devin Singletary of the Bills.

Singletary has shown big play ability and as the Bills already have made T.J. Yeldon inactive, I think Singletary gets enough touches in a great match-up agianst the Dolphins to do some damage.

We have some value in Allen Lazard for the Packers who I still think will be involved even though Allison looks like he is playing.

We have Evan Engram who has that great match-up against the Arizona Cardinals who haven’t been able to defend the TE position at all this season.

At the FLEX position, we’re going with Houston’s Carlos Hyde who has seen an incredible 47 rushing attempts over the past two weeks and I think is too much of a value at just $4,700.

For our defense, we’re paying up for the Buffalo Bills who have a dream match-up at home agianst the Miami Dolphins.