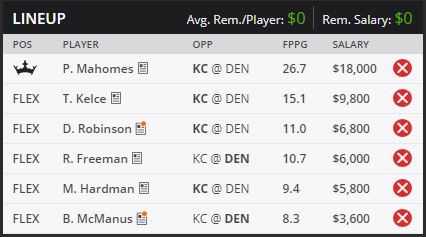 It’s Thursday night which means we have some football and let’s take a look at our DraftKings “NFL Thursday Night Showdown” lineup for the Kansas City vs. Denver game that starts at 8:20pm.

DON’T FORGET TO CHECK OUT OUR FANDUEL "NFL THURSDAY MILLION" LINEUP FOR TONIGHT!!!

I’ve been taking some chances as of late for our single game matchups which some have worked out (HOU/KC last week) and some have bombed (PIT/LAC last week), however, tonight, we’re going to play it bit more of the safe side.

I think Kansas City bounces back with a big game tonight after suffering back-to-back losses and Mahomes dominates despite facing a solid Broncos secondary in a tough environment.

We’re paying up for Patrick Mahomes at our MVP spot and surrounding him with three of his receiving weapons in Travis Kelce, Demarcus Robinson & Mecole Hardman.

For the Broncos, we’re going to go with Royce Freeman who although hasn’t produced as much as Phillip Lindsey, still is seeing plenty of action as he has received double-digit carries in all but one game this season and has had at least 4 receptions in three of his last four games. Denver will most likely run the ball as much as they can tonight to keep the Kansas City offense off the field which means Freeman should get plenty of action and hit value tonight.

We’re also going to pair him with Brandon McManus as he fits our remaining budget and has solid value kicking in the thin air of Colorado.