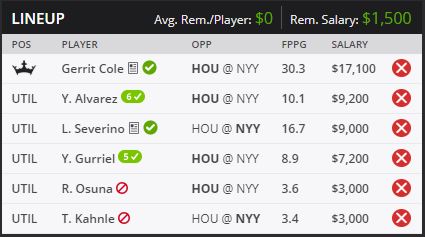 We got some MLB action today and let’s take a look our DraftKings “Single Game Showdown” featuring the Houston Astros taking on the New York Yankees at 4:08pm!

DON’T FORGET TO CHECK OUT OUR MLB CASH LINEUP FOR FANDUEL TONIGHT!!!

This is going to be a GPP lineup.

I’m going to be going for a pitchers duel in this afternoons game and I’m paying up for both Gerrit Cole (MVP) & Luis Severino.

Severino was solid in his limited action this season (12.0 IP) as he posted a 1.50 ERA & 1.00 WHIP while racking up 17 strikeouts. Severino wasn’t efficient in his lone post-season start agianst the Twins as he lasted just 4.0 IP while throwing 83 pitches, however, he was effective as he allowed just 4 hits and 0 ER’s. Severino has the K-upside that we love to roster in our MLB lineups and has he has been solid agianst the current the Astros lineup, I think he has some success today agianst the Astros.

As we spend up some much on starting pitching, we’re going to roster a few bullpen options in Roberto Osuna for the Astros & Tommy Kahnle of the Yankees.

As I’m rooting for an Astros shutout, with Cole & Osuna, my two bats are going to be the Astros Yordan Alvarez & Yuli Gurriel.