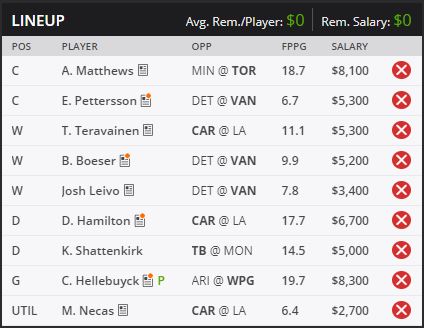 We got a solid NHL 7-game slate tonight and let’s take a look at our NHL DraftKings “Main Slate” lineup that starts at 7:00pm tonight!

DON’T FORGET TO CHECK OUT OUR NHL FANDUEL LINEUP FOR TONIGHT!!!

Starting off, we’re going to go spend up with Auston Matthews of the Toronto Maple Leafs who has hit 30+ FanDuel points in 3 of his 6 games this season. Matthews already has 21 shots on the season and has a solid match-up agianst the Minnesota Wild who rank just 24th in goals allowed.

We have a solid 3-man stack of Vancouver Canucks as we’re going to go with Elias Pettersson, Brock Boeser, & Josh Leivo.

I think the Canucks are in a good value spot tonight against a Red Wings team that is no stranger in giving up goals.

We also have a 3-man stack of Carolina Panthers in Andrel Svechnikov, Dougie Hamilton, & Martin Necas as they have on of the best match-ups of the night agianst the fast-paced Los Angeles Kings.

We have Kevin Shattenkirk of the Tampa Bay Lighting who has been outstanding which his new team, as he already has 3 goals and an assist on the season and is averaging over 20.0 minutes of ice time per game.

In the net, we’re going with Connor Hellebuyck who is against an Arizona team that has scored just 7 times over their first four games of the season.