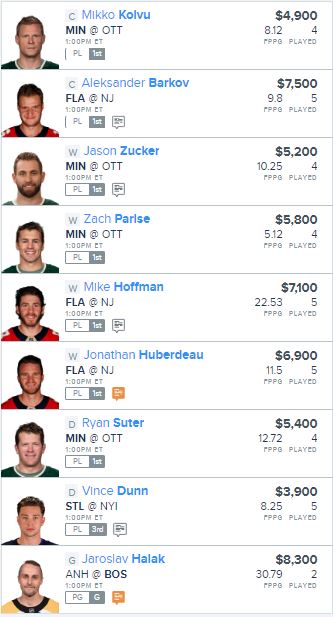 Hope everyone had an outstanding weekend and Happy Columbus Day!

We have some afternoon NHL action today and let’s get the week started off on the right note as we take a look at our lineup for the FanDuel NHL “Main Slate” that features 6 games and starts at 1:00pm.

I think the games to target today will be the MIN/OTT & FLA/NJ and for my lineups, I’m stacking both the Minnesota Wild & Florida Panthers.

Minnesota has been disappointing so far this season, however, I think this just opens the opportunity to get some value in a great match-up agianst the Ottawa Senators who are currently allowing an average of 4.25 goals per game which ranks 29th in the NHL.

I’m going with the Panthers largely due to what I’ve seen from the Devils so far this season. The Devils rank 28th in goals allowed per game and have been awful when it comes to the penalty kill, as their PK% ranks dead last in the NHL at 50%.

We needed to get some value at our 2nd defenseman spot and going with the Blues Vince Dunn who is seeing about an average of 16 minutes of ice time per game and has registered 10 shots over the last two games.

In net, we’re going with the Bruins Jaroslav Halak who arguably the best back-up goalie in the league and has a good match-up at home against an Anaheim team that currently ranks 26th in goals scored.