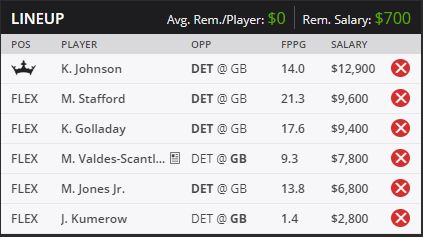 Hope everyone had an outstanding weekend and Happy Columbus Day!

It’s Monday Night so you know that we have some NFL action!

Let’s take a look at our DraftKings Single Game Showdown that starts at 8:15pm and features the Detroit Lions traveling to Lambeau Field to take on the Green Bay Packers.

DON’T FORGET TO CHECK OUT OUR NFL FANDUEL LINEUP FOR TONIGHT!!!

It’s tough going against Aaron Rodgers & Aaron Jones at Lambeau Field, however, I’m not in love in paying up for either playing tonight.

Rodgers is missing his main target in Devante Adams and I think it’s going to be tough for him to get going as the Lions should have both Darius Slay & Quandre Diggs back in the secondary.

Jones is coming off a monster game against the Cowboys, however, Jamaal Williams will be back tonight and as I think the Packers go back to splitting carries, I just don’t love paying this much for him tonight.

As we’re betting on Detroit playing with a lead, we’re going to expect the Packers to have the throw the ball to have a chance. For our Packers players, we’re going with both Marquez Valdes-Scantling & Jake Kumerow.