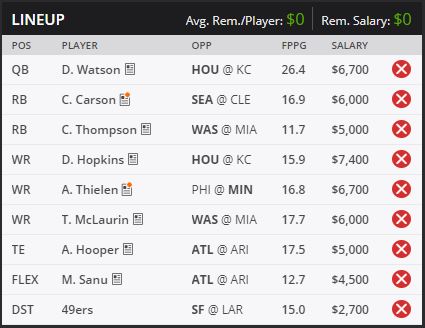 It’s Sunday which means we got a full slate of NFL on our hands today!

Let’s take a look at our lineup for the DraftKings NFL “Main Slate” that features 10 games and starts at 1:00pm.

DON’T FORGET TO CHECK OUT OUR NFL FANDUEL LINEUP FOR THE MAIN SLATE!!!

At QB, we’re going to with Deshaun Watson who is coming off his best performance of the season, putting up a monster 44.74-point performance (426 passing yards; 5 TD; 47 rushing yards) against Atlanta last week. The match-up is once again solid for Watson as he takes on the Kansas City Chiefs secondary that hasn’t been anything more than average this season.

Along with Watson, we’re going to pair him up with DeAndre Hopkins. Hopkins has been somewhat quiet since his opening week 2 TD performance, however, I think this is a perfect spot for him. Many people are going to be on Will Fuller V after his huge game last week, however, now with teams having to pay more attention to Fuller V with over the top safety help, I think this is a great spot for Hopkins who is still averaging about 9 targets per game.

Chris Thompson has yet to find the end zone this season, but I think today is the day as he is going agianst a Miami Dolphins defense that has had no answers for opposing RB’s and have allowed a league high 3 receiving TD’s to RB’s. Thompson is averaging 7 targets per game out of the backfield and as Keenum in particular looked his way 18 times in the first two games of the season, I think Thompson has a solid game today.

Carson is the workhorse RB for a Seattle team that loves to run the football and as there are playing a Cleveland Browns team that we saw had no answers for the 49ers rushing attack last week, I think Carson is one of the best plays at RB today.

We’re paying up for both Adam Thielen & Terry McLaurin who have optimal match-ups today.

McLaurin is the clear cut top-option at WR for the Redskins against a Miami secondary that has allowed 12 TD’s to receivers on the season.

We’re pairing up some of the top targets for the Falcons in Austin Hooper & Mohamed Sanu.

We needed to get some action on the Atlanta Falcons in their great match-up against the Arizona Cardinals and we did so by paying up for TE Austin Hooper. Hopper have been averaging more than 20 DraftKings points over the last three weeks and faces a Cardinals defense that has been the league worst agianst TE’s, allowing them to average 20.0 FanDuel points per game this season.

Sanu has been quietly affective for the Falcons this season as he generally takes advantage of man-to-man coverage while secondaries focus on Julio Jones & the speedy Calvin Ridley. Sanu caught all 5 targets last week for 42 yards and a TD and even saw an incredible 12 targets the week before against Tennessee. Sanu has a great match-up agianst Arizona and I like his value in this match-up.

For our defense, I’m taking a bit of a chance with the San Francisco 49ers in their match-up agianst the Rams. I don’t think the 49ers are going to be able to keep the Rams off the scoreboard, however, Goff hasn’t looked great this season and has been committing a bunch of turnovers. I think defensive front will be able to give Goff some trouble and if they can get a few turnovers, I think they can hit value today.

See ALL of our NFL Game Picks Against the Spread