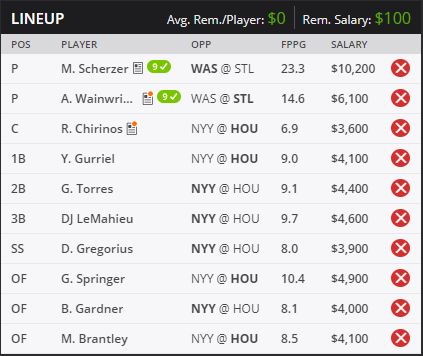 Hope everyone is having a great start to their weekends!

Let’s continue that success tonight as we take a look at our lineup for DraftKings MLB “Relay Throw” that starts at 4:08pm!

On the mound, we’re going to focus on the WAS/STL game and roster both the Nationals Max Scherzer & the Cardinals Adam Wainwright.

Scherzer struggled towards the end of the regular season, however, he looked more like his regular self in the NLDS and pitched well in his last start (7.0 IP, 4 H, 1 ER, 7 K). St. Louis has had struggled agianst RHP’s this season which was on full display last night and as Scherzer has the best K-upside on the slate, I think he is a must in tonight’s lineup.

Wainwright was outstanding in his lone start against the Braves in the NLDS (7.2 IP, 4 H, 0 ER, 8 K) and was outstanding against Washington this season as over two starts, he went 13.1 IP was posting a 1.35 ERA. St. Louis needs this win and I trust Wainwright’s experience to have a solid outing tonight.

On the offensive side we’re going with 4-man stacks of both the Houston Astros & New York Yankees. Although Greinke & Tanaka are both capable of putting up solid performances, both are prone to HR’s and I’m banking on a high-scoring Game 1 in the ALDS.