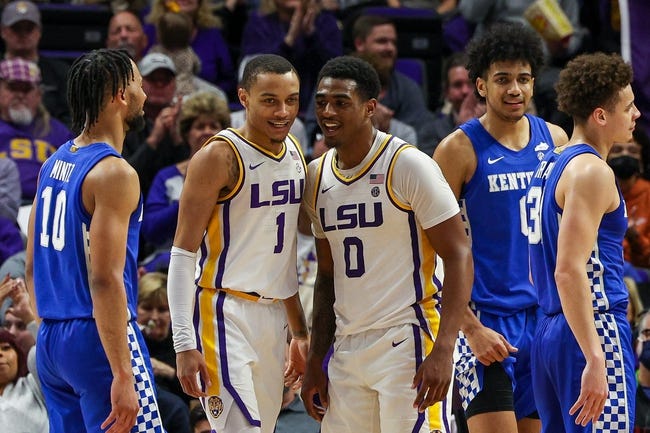 The LSU Tigers and Kentucky Wildcats face off on Wednesday in a college basketball showdown at Rupp Arena. When these two teams faced off on January 4th it was LSU that came away with the 65-60 victory.

LSU used a balanced attack with three different players scoring at least 10 points. Kentucky was led by Davion Mintz and he had 16 points.

LSU comes into this game with a 19-8 record overall and they have gone 16-11 against the spread. LSU has been a bit inconsistent the second half of the season, and in the last game against South Carolina they lost by two points. The defense really struggled giving up 77 points and that led to the two point defeat. LSU is averaging 73.1 points while their defense is giving up 61.9 points per game. Tari Eason has been the top player for LSU averaging 16.9 points while shooting 53.4 percent from the field and 35.6 percent from behind the three point line.

On the other side of this matchup is the Kentucky Wildcats who sit with a 22-5 record overall and they have gone 13-14 against the spread. In the last game against Alabama they fell behind early, but they were able to fight back, and ended up winning 90-81. Forward Oscar Tshiebwe has been the top player for Kentucky averaging 16.4 points while shooting 59.3 percent from the field. Kentucky is averaging 80.9 points while their defense is giving up 65.3 points per game. In this game Kentucky needs to find more offensive success.

There are some games where the trends point you towards the right play, and that is the case with this game. Look for Kentucky to continue to run up the score, but LSU’s defense is going to be an issue. Back the over to cash.