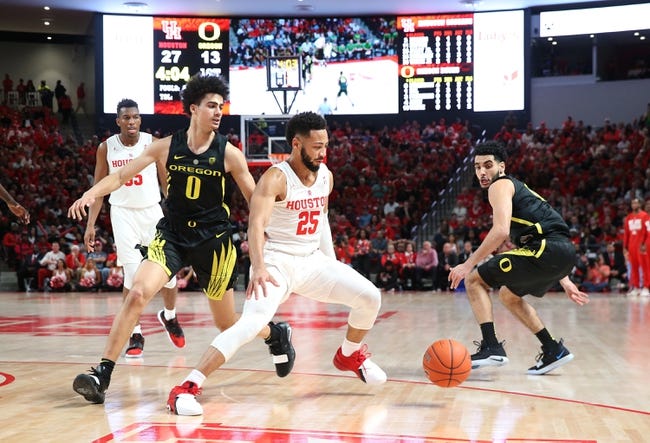 Both Houston and Oregon will look to combat losses in the third-place game of the Maui Invitational on Wednesday afternoon.

The Houston Cougars are looking to bounce back after being upset yesterday 65-63 by Wisconsin in their semifinal matchup Tuesday afternoon in their most recent game. Houston shot 42.6% from the field, including nine of 23 from three-point range, but hurt themselves by failing to hit free throws down the stretch. Kyler Edwards led the Cougars with 18 points in the loss.

The Cougars are averaging 72.4 points per game on 45.5% shooting from the field. They are only giving up 57 points per contest. Houston has struggled at the charity stripe, cashing in only 61.4% of their attempts on the year as it cost them their last game.

The Cougars are led in scoring by Marcus Sesser who is averaging 18 points per game for this team. Kyle Edwards averages close to 15 and after yesterday’s loss, he is the only other double digit scorer for the Cougars.

Oregon struggled shooting the ball in their loss to Saint Mary’s. The Ducks shot 39.2% from the floor, including two of eight from three-point range, and allowed Saint Mary’s to shoot 52.1% from the field in the contest. Eric Williams Jr. led the Ducks with 13 points in the loss.

The Oregon Ducks are led in scoring by Eric Williams who is averaging 13 points and 5 rebounds. Former Rutgers Guard, Jacob Young has also been a featured part of this offense as he averages 11 points per game. Will Richardson averages 10.8 points a night.

The Ducks are 5-1 ATS in their last 6 neutral site games as an underdog.

This is a tough game to handicap as it features great teams coming off of losses. Houston is great on offense, but struggles defensively and at the free throw line. Oregon has similar issues but I think they can get the stops they need as the Cougars live and die by the three. I’ll lay the points with Oregon as I think this is a one or two possession game.