Houston has made it back to the Final Four for the first time since 1984. The early 80s Cougars teams were dynamic, reaching the Final Four in 1982, 1983, and 1984. Houston has made it to the NCAA Championship game twice (1983, 1984), but has never won a Championship in school history. Houston had to take down Cleveland State and Rutgers in the first two rounds and Syracuse and Oregon State in the Sweet 16/Elite 8 to reach this Final Four contest. Houston is the only team remaining that has not had to face a single-digit seed in the tournament yet. Houston's leading scorer is G Quentin Grimes, who scores 18.0 points per game for the Cougars. Houston as a team has scored 76.6 points per game and has shot the ball at a 43.7% clip from the field. Houston is one of the best offensive rebounding teams in the nation, earning second chance opportunities on 39.8% of its missed shots. Houston's defense is also stellar, allowing only 55.8 points per game to its opponents.

Baylor is in the Final Four for the first time in over 70 years, as the last time the Bears went this deep in the tourney it was 1950. Baylor has also never won a National Championship, but the Bears were runner-ups in 1948. Baylor is the #1 seed in the South region and had to take down some tough competition to reach this Final Four game. Baylor defeated Hartford and Wisconsin in the first weekend and took down Villanova and Arkansas in the second weekend. Baylor was the regular-season champions of the Big 12 and only lost two games all season. Baylor's leading scorer this season is G Jared Butler, who scores 16.5 points per game for the Bears. Baylor as a team has scored 83.0 points per game and has shot the ball at a 48.6% clip. According to KenPom, Baylor is the #1 three-point shooting team in the nation. Baylor's defense has been solid also, allowing only 60.3 points per game to its opponents.

Baylor is a 5-point favorite and the total is set at 135.5 I think this game is going to be tight and a lot more entertaining to watch than the second game of the Final Four. Houston's size may give Baylor some trouble, as Baylor is not the best defensive rebounding team. I think Houston's ability to get second chance looks will be enough to at least cover in this game. 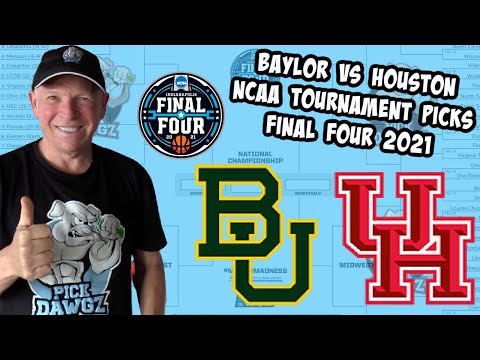