USC is coming off an 82-68 win over its PAC-12 rivals in Oregon in the Sweet 16. USC was a 2-point favorite in that game, therefore the Trojans were able to cover the spread easily to reach the Elite 8. USC has now beaten Drake, Kansas, and Oregon to reach this Elite 8 contest against the top team in the nation in Gonzaga. USC has won each of its first three tournament games by double-digits, which is a very impressive feat. USC's leading scorer this season has been F Evan Mobley, who has scored 16.3 points per game for the Trojans. USC as a team has scored 75.2 points per game and has shot the ball at a 47.4% clip from the field. USC has also allowed 58.3 points per game to its opponents as well.

Gonzaga kept the ball rolling in its win over Creighton on Sunday afternoon. The Zags defeated Creighton by the final score of 83-65, punching its ticket to Elite 8 for the second straight tournament. Gonzaga has defeated Norfolk State, Oklahoma, and now Creighton in the tournament thus far, covering the number in all three games just like USC has. Gonzaga is, of course, the #1 team in the country and has an undefeated record at 29-0. Gonzaga's leading scorer this season has been F Corey Kispert, who has scored 19.0 points per game for the Bulldogs. Gonzaga as a team has scored 91.8 points per game and has shot the ball at a 55.1% clip from the field. Gonzaga has also allowed 63.7 points per game to its opponents as well.

Gonzaga opens as a 9-point favorite and the total is set at 155.5. I do not think USC has the weapons to beat Gonzaga in this game, but I do think the Trojans can at least keep this contest close for quite a while. USC certainly has the athletes to make this game interesting, so I think Gonzaga wins by USC covers. 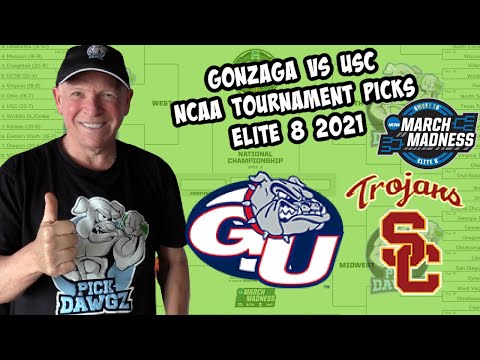