The UCLA Bruins and Alabama Crimson Tide face off on Sunday in a Sweet 16 NCAA tournament college basketball showdown at Hinkle Fieldhouse.

The Alabama Crimson Tide have played two different games to start the NCAA Tournament, but were successful both ways. After playing a slower paced game against Iona, it was the offense that was the difference in the last game against Maryland it was the offense that was elite putting up 96 points and that led to a 19 point victory. Alabama on the season is averaging 79.7 points per game while their defense is giving up 69.5 points per game. Jaden Shackelford has been the best player for Alabama averaging 14.3 points while shooting 41.2 percent from the field. Four different players are averaging at least 11 points per game.

The UCLA Bruins have played three games so far during the NCAA Tournament and they have been able to win all three of them. To start the tournament they beat Michigan State, followed by wins against BYU and Abilene Christian. In the last game it was the defense that was the difference for UCLA giving up only 47 points and that led to a 20 point victory. UCLA on the season is averaging 73.3 points per game while their defense is giving up 68.7 points per game. The best player for UCLA all season has been Johnny Juzang and he is currently averaging 15 points while shooting 42.7 percent from the field and 34.8 percent from deep.

Alabama is the better team in this matchup and they will have no issue getting the job done. UCLA isn’t going to keep up and that will be the difference in this game. Back Alabama to come away with a cover of the spread. In terms of the total this should be an up tempo game and the over will cash.

Get Premium Picks Start Winning Now »
The pick in this article is the opinion of the writer, not a PickDawgz site consensus.
Previous Pick
Florida State at Michigan: 3/28/21 NCAA Tournament College Basketball Picks and Predictions
Next Pick
Oregon at USC: 3/28/21 NCAA Tournament College Basketball Picks and Prediction 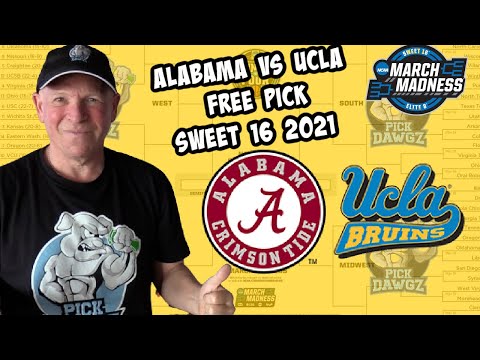