The Florida State Seminoles and Michigan Wolverines face off on Sunday in a Sweet 16 matchup at Bankers Life Fieldhouse.

The Florida State Seminoles had another strong regular season, and they have looked good since the NCAA Tournament has started. In the first game against UNCG they only gave up 54 points which led to the victory. In the last game against Colorado it was the defense that was the difference again giving up only 53 points. The star of the show in the last game was Anthony Polite who finished the game with 22 points, five rebounds, and four assists. In this game for Florida State it’s going to be about the defense stepping up again and making life tough on the Wolverines defense. M.J. Walker has been the best player for Florida State averaging 12.3 points while shooting 44.1 percent from the field and 43.6 percent from behind the three point line.

On the other side of this matchup is the Michigan Wolverines who are a one seed, and in the last game against LSU they did have some issues. At halftime, Michigan was only leading by one point, but in the second half they pulled away late, and that led to an 86-78 victory. Eli Brooks and Chaundee Brown were the best players in the last game against LSU putting up 21 points each. In this game the defense is going to need to step up, and be a lot better, or they could be in some trouble. Center Hunter Dickerson has been the best player for Michigan averaging 14.2 points while shooting 60.6 percent from the field. One issue for this team is Isaiah Livers is out with an injury and overcoming that has been tough.

I think this is a game that Michigan not having Livers is going to really catch up. Florida State is going to cover the spread, and I will also be putting a few dollars on the money line. 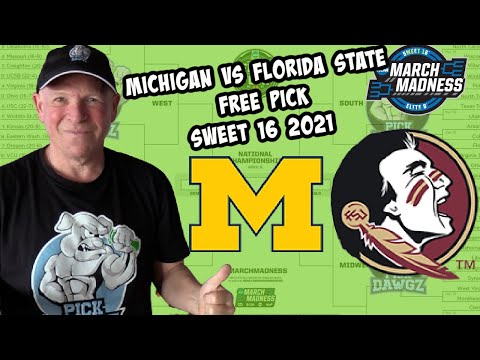