The Villanova Wildcats and Baylor Bears will square off at Hinkle Fieldhouse in the Sweet 16 of the NCAA Tournament this Saturday night.

The 5-seed Villanova Wildcats (18-6) had no trouble securing a spot in the Sweet 16 after easily defeating the 13-seed North Texas Mean Green, 84-61, this past Sunday. Villanova was lights out on the offensive end against North Texas and had no trouble securing the victory after going into halftime with a 47-27 lead. Villanova shot 55.4% from the field and 50.0% from beyond the arc while North Texas shot 40.4% from the field and 30.8% shooting from beyond the arc. Villanova was outrebounded by North Texas by a 28-26 margin, however, won the turnover battle by a 9-6 margin in the victory. Leading the way for the Wildcats was Jeremiah Robinson-Earl who had 18 points, 6 rebounds, 6 assists, 1 block, & 1 steal.

Defensively, Villanova is holding their opponents to an average of 66.7 ppg on 44.1% shooting from the field. The Wildcats have a rebound margin of 1.2 and a turnover margin of 3.6.

Defensively, Baylor is holding their opponents to an average of 65.8 ppg on 43.0% shooting from the field. The Bears have a rebound margin of 4.3 and a turnover margin of 5.5.

Villanova showed that they can still shoot the basketball with an impressive offensive performance in the 1st half against a very good North Texas defense, however, I still have trouble trusting the Wildcats without Connor Gillespie, especially with them going up one of the best teams in all of College Basketball. Baylor had looked a little sluggish over the past few weeks since they returned after being shut down due to Covid, however, the Bears looked outstanding against a good Wisconsin team and have been solid on both sides of the ball this season as they currently rank 5th in scoring offense & 56th in scoring defense. Villanova has had a nice run, however, as Baylor is looking like they are back in similar form that we saw for the first two months of the season, I think the Bears defense gives Villanova trouble and that they do enough to cover this mid-range spread. Good Luck! 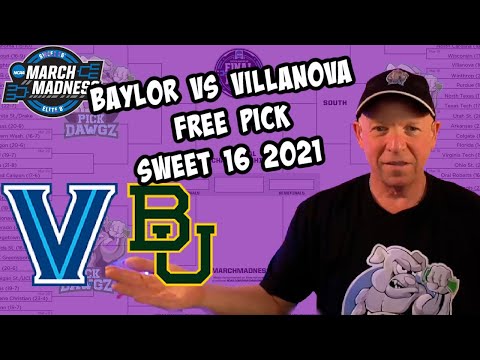