The Houston Cougars will face off against the Syracuse Orange in an epic Sweet 16 matchup. Whoever moves on will face the winner of Oregon State and Loyola Chicago.

Syracuse heads into this one having gone 7-3 in their last ten. Most recently they came away with a tight 75-72 victory over West Virginia in the second round of the tournament. Syracuse shot 51.9% from the field and 45.2% from deep, while holding West Virginia to 37.1% shooting in the game. Syracuse is averaging 75.9 points per game this season, while allowing 70.4 to their opponents. They have an impressive 1.36 assist-turnover ratio, and are assisting on 56.5% of their field goals. Buddy Boeheim has been red hot of late, and leads the team with 18 points per game while shooting 39.6% from three. Quincy Guerrier has had a solid year, averaging 13.9 points and 8.5 rebounds per game.

Houston has now won nine games in a row after knocking off Rutgers 63-60 in their second round game. Rutgers shot the ball better, but Houston grabbed ten more rebounds and hit some clutch shots late to seal the victory. For the year the Cougars are averaging 77.4 points per game, while only allowing 57.9 to their opponents. Their 40.9 rebounds per game are good for 12th in the nation. They own an efficient 1.3 assist-turnover ratio, and assist on 51.5% of their field goals. Quentin Grimes leads the team with 18.1 points per game. Justin Gorham has been a factor down low, averaging 8.5 points and 8.6 rebounds per game.

Houston has been on a tear, but they have been arguably playing this well all season. Their defense has been great, only allowing their opponents to score over 70 once during their 9 game win streak. Syracuse is 2-5 this season when being held under 70 points. The Orange have been on an impressive run, but it will come to an end Saturday. This should be a close one, but Houston will find a way to pull away late. Give me the Cougars to cover. 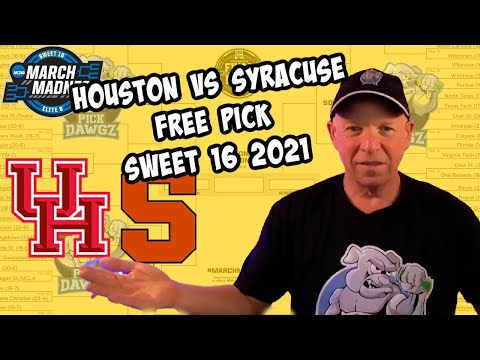