The Oregon State Beaves and Loyola Chicago Ramblers will square off at Bankers Life Fieldhouse this Saturday night in the Sweet 16 of the NCAA Tournament.

Defensively, Oregon State is allowing their opponents to average 68.0 ppg on 42.9% shooting from the field. The Beavers have a rebound margin of 1.2 and a turnover margin of 0.7.

The 8-seed Loyola Chicago Ramblers (26-4) pulled off an incredible upset and advanced to the Sweet 16 after defeating the 1-seed Illinois Fighting Illini, 71-58, this past Saturday. Loyola Chicago was incredible on the defensive end against the high-powered Illinois offense and had no trouble picking up the victory after taking a 49-36 lead with 11:05 left in regulation. Loyola Chicago shot 51.0% from the field and 40.0% from beyond the arc while Illinois shot 44.9% from the field and 28.6% from beyond the arc. Loyola Chicago outrebounded Illinois by a 30-27 margin while also winning the turnover battle by a 17-11 margin. Leading the way for the Ramblers was Cameron Krutwig who had 19 points, 12 rebounds, 5 assists, & 4 steals.

Defensively, Loyola Chicago is holding their opponents to an average of 55.8 ppg on 41.3% shooting from the field. The Ramblers have a rebound margin of 5.2 and a turnover margin of 2.1.

Oregon State has made an incredible run as after being picked to finished last in the Pac-12 this season, the Beavers behind a solid defense and their floor general, Ethan Thompson, have continue to pile up wins and pull off upsets. Loyola Chicago had one of the more dominating performances of the NCAA Tournament with their win against Illinois and have been great on both sides of the court as they come in with the top-ranked scoring defense and 4th ranked FG%. Loyola Chicago does a great job of forcing their opponents to play their style of game, however, Oregon State has been equally impressive with their wins against Tennessee & Oklahoma State and although I think the Ramblers pick up the win, I think Oregon State does enough to keep it within this large number. Take Oregon State and the points. 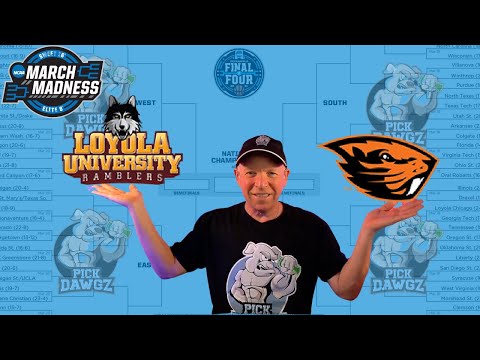