The Arkansas Razorbacks head into this game having won 9 of their last 10 games after coming away with a 68-66 victory over Texas Tech in their 2nd round matchup. Arkansas only shot 23.5% from three, but held the Red Raiders to 36.1% shooting from the field to help etch out the victory. Arkansas is averaging 82 points per game this season, good for 12th in the nation. They are holding their opponents to 70.4 points per game. The Razorbacks have a 1.13 assist-turnover ratio, and are assisting on 50.7% of their field goals. Moses Moody leads the team with 17.1 points per game, while also averaging 5.8 rebounds. Justin Smith has also been a big factor, averaging 13.9 points and 5.8 rebounds per game.

Oral Roberts came away with their seventh straight win, stunning the Florida Gators 81-78 in their round of 32 game. It was their second straight upset, becoming only the second 15 seed to make it to the Sweet 16. Florida shot the ball better, and outrebounded the Golden Eagles, but a +8 turnover differential allowed Oral Roberts to stay in the game and come away with the win at the end. For the season the Golden Eagles are averaging 81.5 points per game, tied for 16th in the nation, while allowing 75.7 to the opposition. They own a 1.1 assist-turnover ration, and assist on 44.8% of their field goals. Max Abmas leads the team and the nation with 24.5 points per game, and also leads the team with 3.8 assists. Kevin Obanor has had a great season as well, averaging 19 points and 9.6 rebounds per game.

Two great offenses will face off in this one, as both teams average over 80 points per game. I expect this to be a shootout, and Oral Roberts will be able to keep up. Abmas and Obanor have been playing lights out in the tournament, and both scored over 25 in the last one. Arkansas does have the edge on the glass and plays solid defense, but Oral Roberts is playing too well for me to fade them by 11 points here. Give me the Golden Eagles to cover. 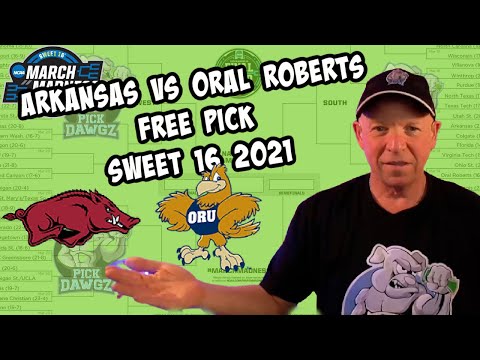