Oklahoma faces Gonzaga on Monday, March 22nd at Hinkle Fieldhouse for an NCAA Tournament #8 vs. #1 matchup.

Oklahoma was able to get past Missouri even without its second-leading scorer in De'Vion Harmon. The Sooners took down Mizzou by the final score of 72-68 in a game that Oklahoma was down by 1 at halftime. Oklahoma jumped out to a strong lead early in the second half, and that lead was never really in question throughout the rest of the game. Oklahoma's reward is to now play the number one overall seed in the tournament in Gonzaga, a team that has not lost a single game all season long. Oklahoma's leading scorer so far this season has been G Austin Reaves, who has scored 17.9 points per game for the Sooners. Oklahoma as a team has scored 74.7 points per game and has shot the ball at a 44.1% clip from the field. Oklahoma has also allowed 68.0 points per game to its opponents as well.

Gonzaga had no problems in defeating Norfolk State out of the MEAC, as the Zags won and covered by the final score of 98-55 on Saturday night. Gonzaga was ready for this year's tournament, and its shots were falling from all over the court in a blowout victory. Gonzaga is now a perfect 27-0 and will look to punch its ticket to the Sweet Sixteen for a date with either Creighton or Ohio. Gonzaga's leading scorer this season has been F Corey Kispert, who has scored 19.3 points per game for the Bulldogs. Gonzaga as a team has scored a whopping 92.3 points per game and has shot the ball at a 55.1% clip this season. Gonzaga has also allowed 55.0 points per game to its opponents as well.

Gonzaga opens as a 14-point favorite and the total is set at 152. I do not see how Oklahoma can keep up with Gonzaga in this game, as the Bulldogs are far too quick. Without Harmon, (who is out the first two rounds of the tournament) I do not see where all of the necessary Sooner offense comes from for a cover. I will lay the points with Gonzaga. 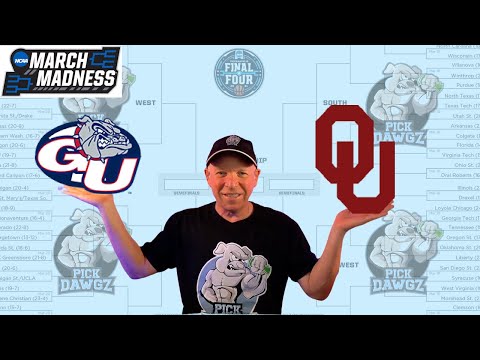