The Ohio Bobcats will be facing the Creighton Bluejays in the second round of the NCAA tournament this Monday. Both teams will be looking to advance to the Sweet Sixteen with a win.

The Ohio Bobcats stunned the 4th seeded Virginia Cavaliers 62-58 in their first round game. They held the Cavaliers to 35% shooting and 25.8% from three, and outrebounded them 38-29. Ohio is 9-1 in their last 10, including a sweep of their conference tournament. The Bobocats have scored at least 80 points in all but 3 games during that span, and have not lost when reaching that number. Ohio ranks 17th in the nation with 17.9 assists per game, and 22nd with 80.9 points per game. They are shooting 48.9% from the field, and 36.1% from three. They own an impressive 1.48 assist-turnover ratio, and assist on 60% of their field goals. Jason Preston leads the team with 16.6 points and 7.2 assists per game.

Creighton survived their opening game 63-62 against the 12 seed UC Santa Barbara Gauchos. Both teams shot the ball poorly, with the Gauchos shooting 23.8% from three and the Blue Jays shooting 28%. The Bluejays are 7-3 in their last 10. Creighton is averaging 77 points per game, and allowing 68.3 to their opponents. The Bluejays shoot 47.6% from the field, and 36.7% from three. They have solid 1.41 assist-turnover ratio, and assist on 55.7% of their field goals. Marcus Zegarowski leads the team with 15.5 points and 4.3 assist per game.

Creighton comes into this game as the favorite, despite not playing their best ball. They are averaging 77 points per game this season, but have failed to score more than 65 during their last three. They scored less than 60 in two of those, and shot less than 30% from three in each. Ohio just held a great Virginia team to 58 points so they will frustrate the Bluejays offense. Creighton has the ability to score with any team in the nation, but have not been playing that way of late. This game could come down to the last basket, so I will take the points here. Give me the Bobcats to cover. 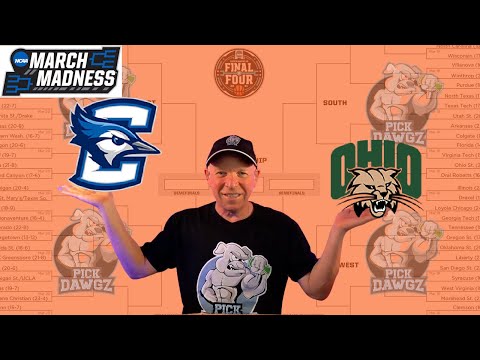