The Alabama Crimson Tide will be facing the Maryland Terrapins in the 2nd round of the NCAA tournament this Monday. The winner of this game will advance to the Sweet Sixteen and face the winner of Abilene Christian and UCLA.

Maryland came away with a solid 63-54 victory over UConn to start their tournament. They shot 51.2% from the field, and 50% from three, while holding the Huskies to 32.3% shooting. Maryland is 7-3 in their last ten games, but 2-3 in their last 5. The Terrapins are averaging 68.8 points per game, and allowing 65 to their opponents. Maryland is shooting 45.6% from the field and 35.3% from beyond the arc. They have a 1.18 assist-turnover ratio, and have assisted on 55% of their field goals. Eric Ayala leads the team with 14.9 points per game, while the next leading scorer Aaron Wiggins is contributing 14 points per game.

The Crimson Tide cruised to a 68-55 victory over the Iona Gaels in their first round game. They shot 47.2% from the field, and held Iona to 21.7% shooting from deep. Alabama also outrebounded the Gaels 42-26. The Crimson Tide are 9-1 in their last 10, and are 5-0 when scoring 80 or more during that span. Alabama is averaging 79.6 points per game, good for 34th in the nation, while allowing 69.8 to the opposition. They are shooting 43.1% from the field, and 35.1% from three. The Crimson Tide have just over a 1-1 assist-turnover ratio, and are assisting on 51% of their field goals. Jaden Shackelford leads the team with 14.2 points per game. Herbert Jones has also been a factor with 11.2 points, 6.5 rebounds, and 3.4 assists per game.

Maryland played well in their first game, but UConn has not been a consistent team this season. The Terrapins have not played well of late, going 2-3 in their last 5. Alabama comes into this game hot, having won 7 straight games including winning the SEC tournament. Alabama has one of the best offenses in the nation, and is the much deeper team. Maryland is going to try to rely on their defense to keep this close, but ultimately I don't expect the Crimson Tide to allow them to hang around late in this game. Give me Alabama to cover. 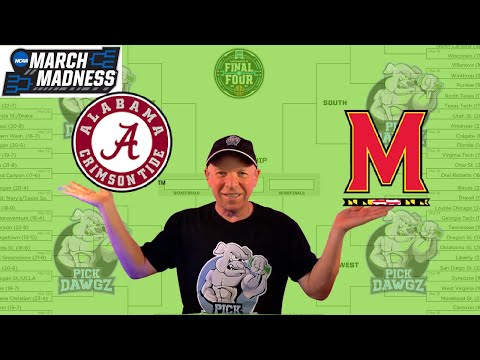