The Wisconsin Badgers and Baylor Bears will square off at Hinkle Fieldhouse this Sunday afternoon in the 2nd round of the South Region in the NCAA Tournament.

Defensively, Wisconsin is holding their opponents to an average of 64.3 ppg on 42.3% shooting from the field. The Badgers have a rebound margin of -1.7 and a turnover margin of 2.9.

The 1-seed Baylor Bears (23-2) was able to advance to the 2nd round after defeating the 16-seed Hartford Hawks, 79-55, this past Friday night. Baylor got off to a slow start against Hartford, however, Baylor’s offense finally found their rhythm near the end of the 1st half and had no trouble pulling away from the Hawks after going into halftime with a 37-21 lead. Baylor shot 41.3% from the field and 33.3% from beyond the arc while holding Hartford to just 35.2% shooting from the field and 22.7% shooting from beyond the arc. Baylor outrebounded Hartford by a 43-25 margin and won the turnover battle by a 24-10 margin. Leading the way for the Bears was MaCio Teague who had 22 points, 4 rebounds, 1 block, & 1 steal.

Defensively, Baylor is holding their opponents to an average of 66.4 ppg on 49.3% shooting from the field. The Bears have a rebound margin of 4.4 and a turnover margin of 4.9.

Wisconsin looked great in their opening matchup against the Tar Heels, however, I think it’s going to be hard for the Badgers to match the offensive output that we saw against North Carolina against the tough Baylor defense as the Badgers came into the NCAA Tournament ranked just 217th in scoring offense & 268th in FG%. Baylor has looked a bit sluggish since coming back from their time off due to Covid-19 protocols in early/mid February, however, this is a team that has been dominant on both sides of the ball this season, ranking 3rd in scoring offense, 1st in 3-FG%, & 61st in scoring defense, and as I just don’t think Wisconsin has the offense to keep up with Baylor, I think the Bears pull away in the 2nd half and cover this mid-range spread. Good Luck! 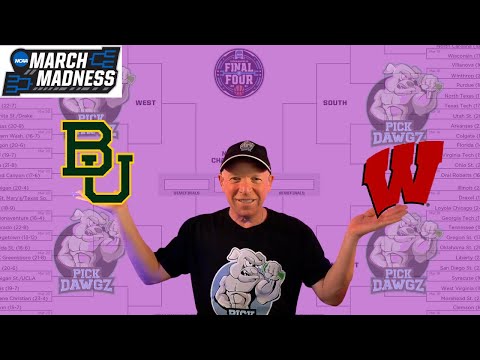