The Florida Gators will be facing the Oral Roberts Golden Eagles in the 2nd round of the NCAA Tournament this Sunday. Oral Roberts already played bracket-busters last time out over Ohio State, and will look to continue their Cinderella story in this one.

The Florida Gators come into this game having beaten Virginia Tech 75-70 in their 1st round matchup. Florida shot 56.5% from the field in the game, and outrebounded the Hokies 36-22. The Gators have now gone 5-5 in their last ten games. They have not scored more than 75 points in those ten games, but have not allowed opponents to reach 75 once. During the last ten they are 4-0 when scoring more than 70 points, but 0-3 when allowing more than 70 points. For the season the Gators are scoring 74 points per game, and giving up 69.8 to their opponents. They shoot 46.4% from the field, and 35.7% from three. Florida has a .81 assist-turnover ratio, and have been assisting on 45% of their field goals. Tre Mann has led the team with 15.9 points and 3.4 assists per game. Colin Castleton has also contributed with 12.3 points and 6.2 rebounds per game.

Oral Roberts shocked many in the nation by upsetting the Ohio State Buckeyes 75-72 in overtime to win their first tournament game. The Golden Eagles were outrebounded 49-32 and held to 35.7% shooting, but had a +10 turnover differential to help them steal the victory. Oral Roberts is 8-2 in their last 10 and are winners of 6 straight. However, they have been outrebounded in 5 of those 6 games, with the one exception a draw. In their last ten games, leading scorer Max Abmas is averaging 29.1 points per game, and he had 29 in their OT thriller against the Buckeyes. He is averaging 24.4 points per game to lead the team The Golden Eagles are averaging 81.5 points per game, and allowing 75.6 to the opposition. Oral Roberts shoots 45.4% from the field, and 39% from beyond the arc. They own an efficient 1.1 assist to turnover ratio, and are assisting on 44.8% of their field goals.

Florida has been up and down for most of the season, never able rise to the top of a stacked SEC. That experience against elite competition will help them in this one, but it has been made clear that Oral Roberts is not to be slept on. Florida has not been scoring a ton of points of late so if they come away with the win it will be in a defensive battle. I expect Oral Roberts to get enough out of their star duo of Abmas and Obanor to keep this game close. Give me the Golden Eagles to cover. 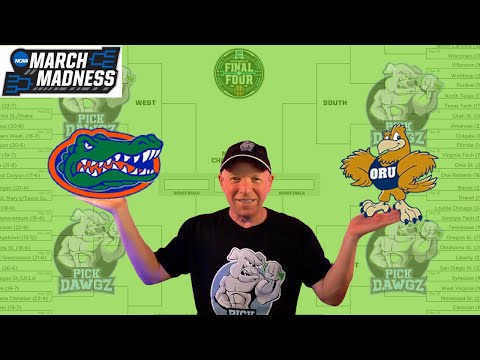