The North Texas Mean Green and Villanova Wildcats will square off at Bankers Life Fieldhouse this Sunday night in the 2nd round of the South Region in the NCAA Tournament.

The 13-seed North Texas Mean Green was able to pull off the upset and advance to the 2nd round of the NCAA Tournament after defeating the 4-seed Purdue Boilermakers, 78-69 (OT), on Friday night. North Texas allowed Purdue to fight back from a 57-49 deficit with 6:13 left in regulation to force OT, however, the Mean Green had no trouble picking up the victory opening the OT period on a 11-0 run. North Texas shot 47.5% from the field and 42.9% from beyond the arc while Purdue shot 36.2% from the field and 30.0% from beyond the arc. North Texas was outrebounded by Purdue by a 39-32 margin, however, won the turnover battle by a 11-8 margin. Leading the way for the Mean Green was Javion Hamlet who had a double-double with 24 points, 12 rebounds, & 5 assists.

Defensively, North Texas is holding their opponents to an average of 61.5 ppg on 40.7% shooting from the field. The Mean Green have a rebound margin of 2.1 and a turnover margin of 1.2.

The 5-seed Villanova Wildcats were able to advance to the 2nd round after defeating the 12-seed Villanova Wildcats, 73-63, on Friday night. Villanova was outstanding defensively against the high-scoring Winthrop offense and was able to pull away in the 2nd half after taking a 58-47 lead with 7:56 left in regulation. Villanova shot 44.2% from the field and 32.0% from beyond the arc while Winthrop shot 36.2% from the field and 31.8% from beyond the arc. Villanova was outrebounded by Winthrop by a 37-35 margin, however, won the turnover battle by a 10-6 margin. Leading the way for the Wildcats was Jeremiah Robinson-Earl who had a double-double with 22 points, 11 rebounds, 6 assists, 3 blocks, & 1 steal.

Defensively, Villanova is holding their opponents to an average of 67.0 ppg on 44.2% shooting from the field. The Wildcats have a rebound margin of 1.3 and a turnover margin of 3.6.

North Texas came into the NCAA Tournament as a popular upset pick and the Mean Green did not disappoint as they showed how their defense, which ranks 11th in scoring defense & 38th in defensive FG%, can slow down any offense in College Basketball. Villanova was able to survive behind a strong defensive effort against a high-scoring Winthrop team and for them to continue to succeed, they will need to continue to have big games from Jeremiah Robinson-Earl as they no longer have their floor general in Collin Gillespie. Villanova is still a very talented team, however, I am a bit concerned about their offense that could only shot 44.2% against a bad Winthrop defense and as I expect this one to be a low-scoring, tight game, I think the play here is to take North Texas with the points. Good Luck! 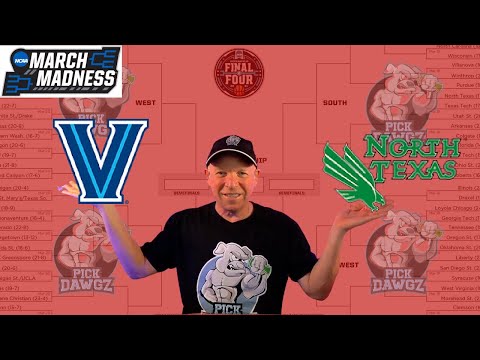