The Ohio Bobcats and Virginia Cavaliers will square off at Simon Skjodt Assembly Hall this Saturday in the 1st round of the NCAA Championship in the West Region.

The 13-seed Ohio Bobcats come into the NCAA Championship with an overall record of 16-7 while finishing conference play with an 9-5 record. Ohio earned the 5-seed in the MAC Championship and was able to punch their ticket to the NCAA Tournament after defeating the Buffalo Bulls, 84-69, this past Saturday in the MAC Championship. Ohio was dominated Buffalo on both ends of the court and had no trouble securing the victory after going into halftime with a 41-21 lead. Ohio shot 50.0% from the field and 53.3% from beyond the arc while Buffalo shot 34.4% from the field and 26.3% from beyond the arc. Ohio was outrebounded by Buffalo by a 40-36 margin, however, won the turnover battle by a 14-12 margin in the victory. Leading the way for the Bobcats was Jason Preston who had 22 points, 6 rebounds, 7 assists, & 5 steals.

Defensively, Ohio is allowing their opponents to average 73.3 ppg on 44.4% shooting from the field. The Bobcats have a rebound margin of 1.3 and a turnover margin of 2.4.

The 4-seed Virginia Cavaliers come into the NCAA Championship with an overall record of 18-6 while finishing conference play with a 13-4 record. Virginia earned the top-seed in the ACC Championship and picked up 72-69 victory over the 8-seed Syracuse Orange in the quarterfinals, however, the Cavaliers had to drop out of the ACC Championship prior to their 2nd round matchup against Georgia Tech due to a positive Covid-19 test within the program. In their game against Syracuse, Virginia trailed by a 39-36 margin at halftime, however, the Cavaliers defense was solid in the 2nd half and was able to hold on for the victory after taking a 67-61 lead with 2:09 left in regulation. Virginia shot 45.5% from the field and 31.4% from beyond the arc while Syracuse shot 42.1% from the field and 36.4% from beyond the arc. Leading the way for the Cavaliers was Sam Hauser who had 21 points, 5 rebounds, 3 assists, & 1 block.

Defensively, Virginia is holding their opponents to an average of 60.5 ppg on 41.6% shooting from the field. The Cavaliers have a rebound margin of 2.6 and a turnover margin of -0.1.

Virginia is a great team, however, despite adding Sam Hauser to the offense this season, the Cavaliers at times have still struggled offensively as we saw during their 3-game losing streak during mid-February. Ohio is a very dangerous team as the Bobcats have an explosive offense that ranks 17th in both scoring offense & FG% and have NBA talent in their Jason Preston. Virginia should be able to get victory here, however, as Ohio showed early this season that they have the talent to matchup with some of the best teams in the country in their 77-75 loss at Illinois and that Bobcats were extremely impressive in knocking off Kent State, Toledo, & Buffalo in the MAC Championship, I think the play here is to take Ohio and the points. Good Luck! 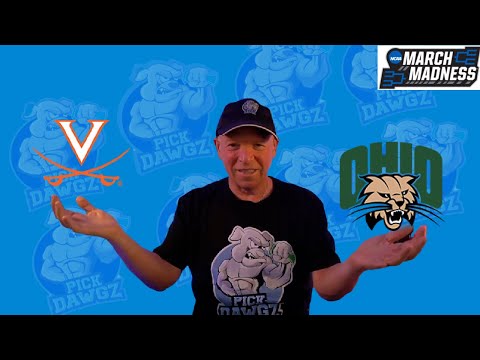