The Wisconsin Badgers and North Carolina Tar Heels will square off at Mackey Arena this Friday in the 1st round of the NCAA Championship in the South Region.

The Wisconsin Badgers come into the NCAA Championship with an overall record of 17-12 while finishing conference play with a 10-10 record. Wisconsin earned the 6-seed in the Big Ten Championship and defeated the 11-seed Penn State Nittany Lions, 75-74, in the 2nd round before losing to the 3-seed Iowa Hawkeyes, 62-57, in the quarterfinals. Wisconsin led Iowa by a 32-26 margin at halftime, however, the Badgers offense struggled in the 2nd half and could not fight back after the Hawkeyes took a 58-54 lead with 1:31 left in regulation. Wisconsin shot 38.6% from the field and 41.2% from beyond the arc while Iowa shot 40.6% from the field and 10.0% from beyond the arc. Leading the way for the Badgers was D’Mitrik Trice who had 19 points, 2 rebounds, & 2 assists.

Defensively, Wisconsin is holding their opponents to an average of 64.3 ppg on 42.3% shooting from the field. The Badgers have a rebound margin of -1.7 and a turnover margin of 2.9.

The North Carolina Tar Heels come into the NCAA Championship with an overall record of 18-10 while finishing conference play with a 10-6 record. North Carolina earned the 6-sedd in the ACC Championship and earned wins over Notre Dame & Virginia Tech before losing to the 2-seed Florida State Seminoles, 69-66, in the semifinals. North Carolina kept the game close in the 2nd half despite a poor shooting performance, however, the Tar Heels could not fight back after the Seminoles took a 65-64 lead on an Anthony Polite three-pointer with 2:09 left in regulation. North Carolina shot 33.8% from the field and 33.3% from beyond the arc while Florida State shot 45.3% from the field and 38.5% from beyond the arc. Leading the way for the Tar Heels was Armando Bacot who had 12 points, 6 rebounds, 1 assist, 2 blocks, & 2 steals.

Defensively, North Carolina is allowing their opponents to average 69.4 ppg on 42.1% shooting from the field. The Tar Heels have a rebound margin of 10.9 and a turnover margin of -0.9.

Wisconsin had high expectations coming into this season, however, the Badgers really struggled towards the end of the season and come into the NCAA Tournament losing 7 of their last 10 games. Wisconsin was led by their defense that ranks 37th in scoring defense, however, the Badgers struggled offensively and currently rank just 217th in scoring offense & 267th in FG%. North Carolina struggled a bit early in the season, losing 4 of 6 games at one point, however, the Tar Heels played much better down the stretch as they had solid wins against Louisville, Duke, Florida State and Virginia Tech over the past 3 weeks. North Carolina has been led by their offense which ranks 71st in scoring offense and had the top rebounding margin in College Basketball. Wisconsin certainly has the talent to make a run, however, I just cannot trust their offense and between the fact that North Carolina has been playing the better basketball and that the Tar Heels should have a big advantage on the boards, I am taking North Carolina to cover this small spread. Good Luck! 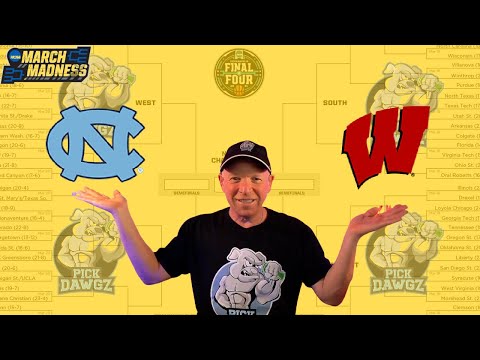