Winthrop is heading into the NCAA Tournament as the Big South Champions this season. Winthrop posted an impressive 23-1 record and had absolutely no problems winning the Big South Conference Tournament, winning each game by double-digits. Winthrop's only loss this season was to UNC Asheville, a team with a ton of talent that did not find its true potential in 2020-21. Winthrop's most impressive win this season was over Furman, KenPom's 92nd best team in the nation. According to KenPom, Winthrop is the 91st ranked team in the country, which is quite impressive for a Big South team. Winthrop's leading scorer this season has been G Chandler Vaudrin, who has scored 12.2 points per game for the Eagles. Winthrop as a team has scored 79.5 points per game, earned 40.3 rebounds per contest, and has allowed 66.8 points per game to its opponents as well.

Villanova at a 5-seed is not something we thought we would see a month or two ago, but injuries and bad losses have forced the committee's hand in placing the Wildcats in this spot. Villanova lost its top guard in Collin Gillespie for the entire season due to an MCL tear. Gillespie led the team in assists at 4.6 and also had 14.0 points per game this season. Villanova had a few impressive wins this season, including victories over Texas, Creighton, and UConn (all tournament teams). Villanova's worst loss of the season was a shocking 12-point loss to Butler, which no one saw coming. Villanova's current leading scorer is F Jeremiah Robinson-Earl, who scores 15.7 points per game for the Wildcats. Villanova as a team has scored 75.5 points per game, has earned 34.3 rebounds per contest and has allowed 66.8 points per game to its opponents as well.

Villanova opens as a 6-point favorite and the total is set at 140. I believe that Winthrop has a fantastic chance of winning this game outright, so taking 6 points is a gift to me. Winthrop is physical, fast-paced, and overall a bad draw for Nova here. I will take my points with the Eagles of Winthrop. 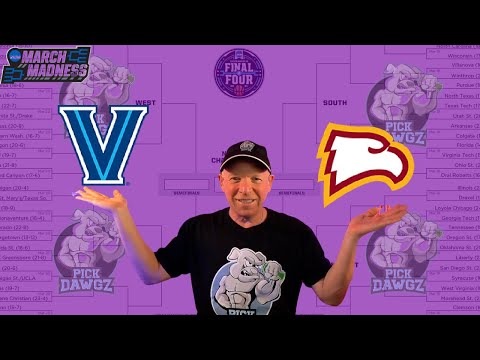