The Oregon State Beavers and Tennessee Volunteers will square off at Bankers Life Fieldhouse this Friday in the 1st round of the NCAA Championship in the Midwest region.

The 12-seed Oregon State Beavers come into the NCAA Championship with an overall record of 17-12 while finishing conference play with a 10-10 record. Oregon State played well at the end of the regular season which helped them earn the 5-seed in the Pac-12 Championship and the Beavers were able to secure their first even Pac-12 Championship after defeating the 3-seed Colorado Buffaloes, 70-68, this past Saturday night. Oregon State was solid on the offensive end against a very good Colorado defense and was able to hang on late after taking a 64-57 lead with 4:38 left in regulation. Oregon State shot 48.1% from the field and 40.9% from beyond the arc while Colorado shot 47.2% from the field and 31.6% from beyond the arc. Leading the way for the Beavers was Jarod Lucas who had 14 points, 2 rebounds, 3 assists, & 1 steal.

Defensively, Oregon State is allowing their opponents to average 68.3 ppg on 43.9% shooting from the field. The Beavers have a rebound margin of 0.3 and a turnover margin of 1.2.

The 5-seed Tennessee Volunteers come into the NCAA Championship with an overall record of 18-8 while finishing conference play with a 10-7 record. Tennessee had an up-and-down 2nd half of the season and earned the 4-seed in the SEC Championship. Tennessee defeated Florida in the quarterfinals, however, the Volunteers were defeated by the top-seed Alabama Crimson Tide by a 73-68 margin in the semifinals this past Saturday. Tennessee looked like they were in good shape to pull off the upset after taking a 48-33 lead early in the 2nd half, however, the Volunteers struggled offensively in the 2nd half and Alabama was able to fight back and take the lead for good after a Keon Ellis three-pointer gave the Crimson Tide a 64-61 lead with a 4:07 left in regulation. Tennessee shot 41.7% from the field and 33.3% from the field while Alabama shot 37.3% from the field and 25.0% from beyond the arc. Leading the way for the Volunteers was Keon Johnson who had 20 points, 9 rebounds, 1 assist, 1 block, & 2 steals.

Defensively, Tennessee is holding their opponents to an average of 63.2 ppg on 39.8% shooting from the field. The Volunteers have a rebound margin of 2.2 and a turnover margin of 3.2.

Tennessee is a talented them, however, the Volunteers are just too inconsistent of a team, especially on the offensive end, in my opinion to be trusted. Oregon State has played some great basketball over the past month and between the fact that they have arguably the best player on the court in Ethan Thompson Jr. who should be able to protect the ball against the tough Tennessee defense and that Beavers offense can continue their recent form in which they looked great against Oregon & Colorado, I think Oregon State will be able to keep this game close enough to at worst, cover with the points. Good Luck! 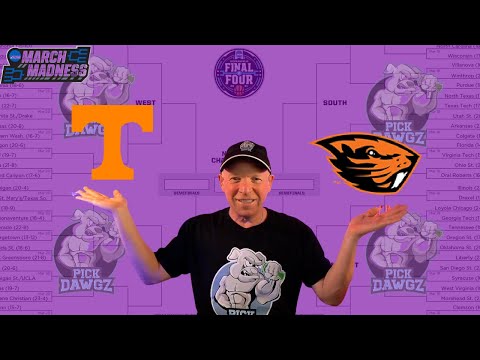