Liberty heads into the NCAA Tournament as the A-SUN Conference Champions yet again. Ever since Liberty joined the Atlantic-Sun in 2019, the Flames have won three A-SUN Tourneys and will now be in their second NCAA Tournament as a member of the conference. Liberty finished the season with a 23-5 record and ended the regular season on a nine-game winning streak, plus the three wins in the conference tournament. Liberty's most impressive win this season was an 84-73 victory over Mississippi State (a current member of the NIT) on November 26th. Liberty's worst loss this season has to be its 65-59 loss to Stetson in conference play. Liberty's leading scorer this season is G Darius McGhee, who scored 15.6 points per game for Flames. Liberty as a team has scored 74.9 points per game, has earned 33.4 rebounds per contest and has allowed 59.6 points per game to its opposition.

Oklahoma State opens as a 9.5-point favorite and the total is set at 142. Here we have two great cover teams in the tricky #13 vs. #4 matchup, but I give the edge to OK State here. I think Liberty is a solid team that got a really, really bad draw here. Oklahoma State is a team that I think could make a run in this tournament, so I will lay the points with Oklahoma State here. 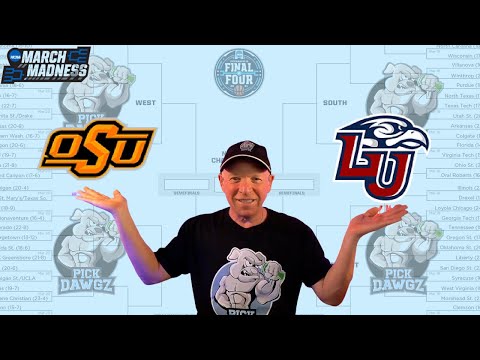