The Georgia Tech Yellow Jackets and Loyola Chicago Ramblers will square off at Hinkle Fieldhouse this Friday in 1st round of the NCAA Championship in the Midwest Region.

Defensively, Georgia Tech is allowing their opponents to average 70.0 ppg on 45.9% shooting from the field. The Yellow Jackets have a rebound margin of -3.6 and a turnover margin of 4.8.

The 8-seed Loyola Chicago Ramblers come into the NCAA Championship with an overall record of 24-4 while finishing conference play with a 16-2 record. Loyola Chicago was outstanding throughout the season and had no trouble securing the Missouri Valley Conference Championship after defeating the Drake Bulldogs, 75-65, on March 7th. Loyola Chicago led by a 36-31 margin at halftime and had no trouble pulling away in the 2nd half after taking a 56-39 lead with 9:28 left in regulation. Loyola Chicago shot 59.1% from the field and 58.8% from beyond the arc while Drake shot 43.6% from the field and 43.8% from beyond the arc. Loyola Chicago lost the turnover battle by a 13-8 margin, however, did outrebound the Bulldogs by a 28-23 margin. Leading the way for the Ramblers was Cameron Krutwig who had 20 points, 8 rebounds, 4 assists, & 2 blocks.

Defensively, Loyola Chicago is holding their opponents to an average of 55.5 ppg on 40.7% shooting from the field. The Ramblers have a rebound margin of 5.0 and a turnover margin of 2.0.

Loyola Chicago is a very good team that has the best scoring defense in all of College Basketball and an efficient offense that ranks 3rd in FG%, however, I do not think the selection committee did the Ramblers any favors, matching them up against a Georgia Tech team that has won 8 straight games and has looked like one of the better teams in all of College Basketball since mid-February. Loyola Chicago will try to keep this game at a slow pace, however, between the fact that the Yellow Jackets can matchup Moses Wright against the Ramblers best player in Cameron Krutwig and that the Yellow Jackets have proven themselves against much tougher competition than the Ramblers have faced, I think Georgia Tech will be able to pull away in the 2nd half and get this victory. Take Georgia Tech on the money line. Good Luck!

Update (3/19/21) - Moses Wright won't be available for the Yellow Jackets and that changes everything in my opinion in terms of this matchup. The line has gone up to -5.5 for Loyola-Chicago to cover but I like the Ramblers now as Georgia Tech just doesn't have a replacement for Wright who was arguably the best player in the ACC down the stretch. 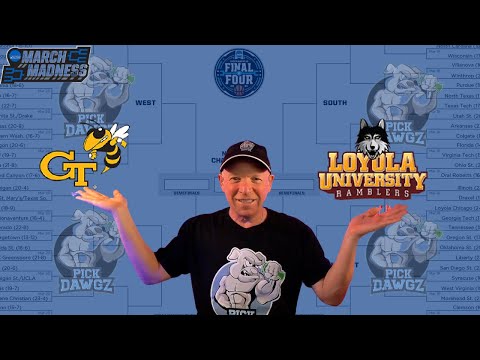