The Western Kentucky Hilltoppers and Saint Mary’s Gales will square off at the Comerica Center in the 1st round of the NIT Tournament this Wednesday night.

The 3-seed Western Kentucky Hilltoppers finished their regular season with an overall record of 20-7 while finishing conference play with a 11-3 record. Western Kentucky earned the top-seed in the East Division of the C-USA Tournament and picked up wins against UTSA & UAB, however, the Hilltoppers could not punch their ticket to the NCAA Tournament after being defeated by the North Texas Mean Green, 61-57 in OT, this past Saturday. Western Kentucky allowed North Texas to fight back after leading by a 48-41 margin with just 2:58 left in regulation to force OT, and the Hilltoppers could not fight back after a Javion Hamlet jumper gave the Mean Green a 59-57 lead with just :16 seconds left in OT. Western Kentucky shot 34.0% from the field and 27.3% from beyond the arc while North Texas shot 39.3% from the field and 36.4% from beyond the arc. Leading the way for the Hilltoppers was Josh Anderson who had 14 points, 4 rebounds, 2 assists, & 3 steals.

Defensively, Western Kentucky is allowing their opponents to average 67.9 ppg on 41.9% shooting from the field. The Hilltoppers have a rebound margin of 6.9 and a turnover margin of -1.6.

The 2-seed Saint Mary’s Gaels finished their regular season with an overall record of 14-9 while finishing conference play with a 4-6 record. Saint Mary’s earned the 4-seed in the WCC Championship and defeated the 5-seed Loyola-Marymount Lions in the quarterfinals, however, the Gales could not make it to WCC Championship games after being defeated by the top-seeded Gonzaga Bulldogs, 78-55, in the semifinals. Saint Mary’s had no answers on the offensive end against Gonzaga and could not fight back after going into halftime trailing by a 44-26 margin. Saint Mary’s shot 36.1% from the field and 10.0% from beyond the arc while Gonzaga shot 53.2% from the field and 33.3% from beyond the arc. Leading the way for the Gaels was Logan Johnson who had 15 points, 4 rebounds, 1 assist, & 1 block.

Defensively, Saint Mary’s is holding their opponents to an average of 62.3 ppg on 42.9% shooting from the field. The Gaels have a rebound margin of 3.0 and a turnover margin of 1.1.

Saint Mary’s was led by their defense this season that ranked an impressive 17th in scoring defense, however, the Gaels had trouble piling up enough wins to make the NCAA Tournament due to an offense that currently ranks just 317th in scoring offense & 269th in FG%. Western Kentucky was impressive this season, highlighted by a 73-71 road win at Alabama, and has been solid on both ends of the court this season as they come into this game ranked 119th in scoring offense & 103rd in scoring defense. I am disappointed that Western Kentucky didn’t make the NCAA Tournament as I thought this team could certainly have pulled an upset or two, and despite being the lower seed in this one, I think the Hilltoppers are the better team and that they walk away with a victory in this one. Take Western Kentucky on the money line. Good Luck! 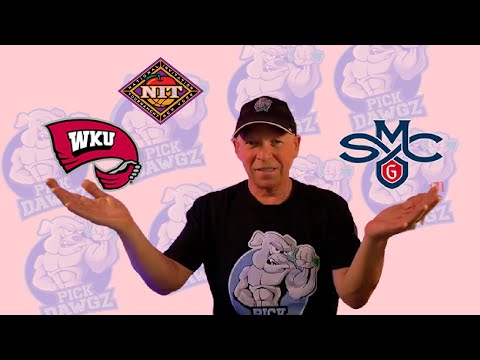