The Houston Cougars will be facing the Cincinnati Bearcats in the AAC Conference Final this Sunday. Houston blew out Cincinnati 90-52 in their one matchup this season.

The Bearcats have now won 3 in a row after sneaking by Wichita State 60-59 in the conference semifinals. Cincinnati shot 40% from the field in the game, and 29.4% from three. They assisted at a high rate, with 14 of their 22 makes coming via the dime. Mason Madsen hit some big shots late, and led the team with 10 points off the bench. Wichita State was able to shoot 40.9% from three, but the Bearcats outrebounded the Shockers 40-31. Cincinnati is averaging 70 points per game this season, while giving up 71.9 to their opponents. Keith Williams leads the team with 14.9 points per game.

In their semifinals matchup Houston survived a second half surge by Memphis, and were able to come away with a 76-74 victory for their 6th straight win. The Cougars shot 45.5% from the field, and 31.8% from three. Houston also hit 19 of 22 attempts from the line. Ten of their 25 makes came via assist. Quentin Grimes led the team with 21 points, and also came away with 4 steals in the game. The Cougars outrebounded the Tigers 35-29. Houston is averaging 77.2 points per game, and allowing 57.4 to their opponents. Quentin Grimes leads the team with 17.7 points per game.

Cincinnati has played tough in the tournament, and knocked off the top seeded Shockers in their semifinals game. However their leader Keith Williams left unexpectedly during the game, without explanation, and it is unclear whether he will be ready to go against Houston. Regardless, he was there when the two played in late February, and Houston won by 38. I like the way the Cougars have been playing. Outside of their two tight games against Memphis, they have won by at least 20 points during their current 6 game winning streak. Give me Houston to cover. 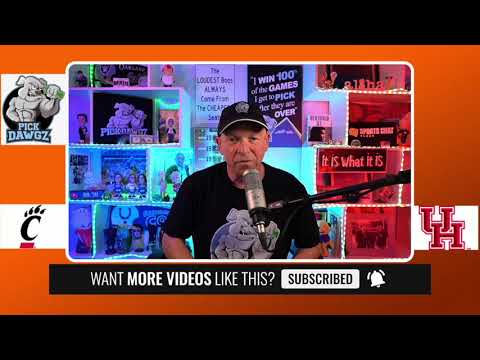