The Georgetown Hoyas will be facing the Creighton Blue Jays on Saturday in the Big East Conference Final at Madison Square Garden. Georgetown surprised a lot of people with their run in the tournament, and are out to prove it was not a fluke and secure a bid to the NCAA Tourney. These two split the season series, with both road teams getting the win.

Creighton heads into this game having won 3 in a row. Last time out they survived to win 59-56 against UConn in the Conference semifinals. The Blue Jays were limited on offense, only shooting 37.1% from the field and 27.8% from three. They assisted on just 7 of 23 makes. Damien Jefferson led the team with 14 points and 12 rebounds. The defense limited UConn to just 32.8% shooting, and outrebounded them 50-33. Creighton is averaging 78 points per game this season, while giving up 68.1 to their opponents. Marcus Zegarowski leads the team with 15.4 points and 4.4 assists per game.

Georgetown has now won three straight in the Big East Tournament after coming away with a 66-58 win against Seton Hall. The Hoyas shot 43.8% from the field and 50% from three. Jamorko Pickett led the offense with 19 points. The Hoyas defense slowed down the Pirates, forcing them to go just 5-18 from beyond the arc. Georgetown also outrebounded Seton Hall by 4. Georgetown is averaging 71.3 points per game, while allowing 71.6 to the opposition. Jahvon Blair leads the team with 15.7 points and 3.8 assists per game.

Creighton looked bad offensively last time out, and you would have to think a lot of that was due to the pressure of the conference final looming. They have been the much better team, but Georgetown has been playing their best ball of the year, having knocked off the one seed Villanova on their way to this conference final. The Hoyas will have the advantage in the paint, and are playing with all the confidence. I expect the Hoyas to be aggressive defensively, and do just enough on offense to keep this thing close. Give me the Hoyas to cover. 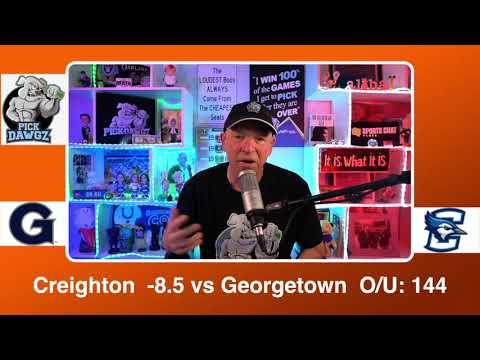