The North Carolina Tar Heels and 15th ranked Florida State Seminoles will square off at Greensboro Coliseum in the Semifinals of the ACC Championship this Friday night.

Defensively, North Carolina is allowing their opponents to average 69.4 ppg on 42.0% shooting from the field. The Tar Heels have a rebound margin of 11.1 and a turnover margin of -1.1.

The Florida State Seminoles finished their regular season with an overall record of 15-5 and earned the 3-seed in the ACC Championship after finishing conference play with a 11-4 margin. Florida State was solid on both ends of the court this season as the Seminoles come into this game ranked t-28th in scoring offense, 42nd in FG%, 13th in 3P-FG%, & 22nd in defensive FG%. Florida State at one point won 9 of 10 games during ACC play, which included an impressive 21-point victory against Virginia, however, the Seminoles did struggle a bit at the end of the regular season, losing 2 of their last 3 games, including a 78-70 loss at North Carolina.

Defensively, Florida State is allowing their opponents to average 70.0 ppg on 40.0% shooting from the field. The Seminoles have a rebound margin of 4.5 and a turnover margin of 0.7.

Florida State is an outstanding team, however, I do not love how they matchup against North Carolina, as the Tar Heels have the size down low to compete with the Seminoles and an offense that has had success putting up points against the Florida State defense during the regular season. Florida State looked tired down the stretch, especially in their 83-73 loss at Notre Dame last Saturday, and as I like what I have seen from North Carolina over the past few weeks, I think the play here is to take the Tar Heels and the points. Good Luck. 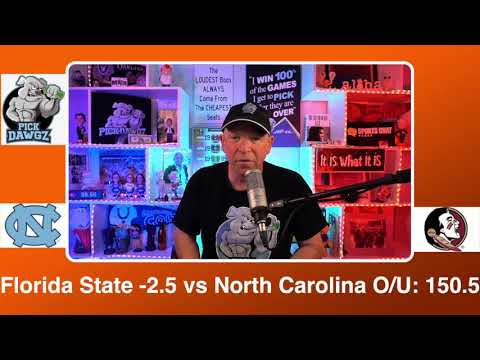