The Syracuse Orange and the 16th ranked Virginia Cavaliers will square off at Greensboro Coliseum in the Quarterfinals of the ACC Championship this Thursday afternoon.

The Syracuse Orange finished their regular season with an overall record of 15-8 and earned the 8-seed in the ACC Championship after finishing conference play with a 9-7 record. Syracuse was able to advance to the Quarterfinals after defeating the 9-seed NC State Wolfpack, 89-68, on Wednesday. Syracuse was outstanding on both ends of the court and had no trouble pulling away in the 2nd half after taking a 68-50 lead with 10:03 left in regulation. Syracuse shot 56.7% from the field and 48.3% from beyond the arc while NC State shot 36.2% from the field and 41.2% from beyond the arc. Leading the way for the Orange was Buddy Boeheim wo had 27 points, 2 rebounds, & 5 assists.

Defensively, Syracuse was allowing their opponents to average 70.8 ppg on 41.6% shooting from the field. The Orange had a rebound margin of -2.1 and a turnover margin of 3.4.

The 16th ranked Virginia Cavaliers finished their regular season with an overall record of 17-6 and earned the 1-seed in the ACC Championship after finishing conference play with a 13-4 record. Virginia was once again led by their outstanding defense which currently ranks 5th in scoring defense, 77th in defensive FG%, & 51st in blocks per game, however, despite having a solid shooting percentage from both the field and beyond the arc, the Cavaliers still struggled putting up points as they currently rank just 249th in scoring offense. Virginia suffered an early season loss to San Francisco and did not put up much of a fight in their game against Gonzaga, however, the Cavaliers won 11 of their first 12 conference games and closed out the season with an impressive 68-58 victory at Louisville.

Defensively, Virginia is holding their opponents to an average of 60.1 ppg on 41.6% shooting from the field. The Cavaliers have a rebound margin of 2.6 and a turnover margin of 0.1.

Syracuse has looked impressive over the last two weeks, however, I think this has just moved this line down in favor of Virginia. Virginia is a tough team to trust as their offense can certainly go on long stretches of ineffectiveness, however, there is no doubting that the Cavaliers are the far superior team and as Virginia defeated Syracuse by an 81-58 margin in the regular season, I think the play here is to take the Cavaliers to cover this mid-range spread. Good Luck! 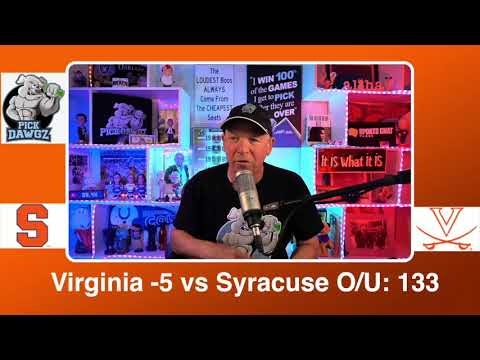