The Arizona State Sun Devils and Oregon Ducks face off on Thursday in a college basketball showdown at T-Mobile Arena.

The Arizona State had to come away with a win over a tough Washington State team on Wednesday to get to this point of the tournament. Arizona State currently sits with an 11-13 record overall and they had lost two games in a row before beating Washington State. On Wednesday the star of the show was Alonzo Verge Jr. who finished the game with 26 points. Arizona State on the season is averaging 74.8 points per game while their defense is giving up 77.3 points per game. On Wednesday the offense struggled, and that led to that game being closer than any expected it to be. Guard Remy Martin has been the best player for Arizona State averaging 19.9 points while shooting 44.1 percent from the field and 33.9 percent from behind the three point line.

The Oregon Ducks come into this game with a 19-5 record overall and coming into this game they have won five games in a row. In the last game against Oregon State, the defense was strong giving up 67 points and that led to an 80-67 victory. The Oregon Ducks on the season is averaging 74.1 points per game while their defense is giving up 66.9 points per game and in this game it’s going to be about the offense running up the score in this game. Guard Chris Duarte has been the best player for Oregon averaging 17.3 points while shooting 53.3 percent from the field and 44 percent from behind the three point line. Six different players are averaging at least 10 points per game for the Ducks.

Arizona State looked terrible on Wednesday and they are facing a more difficult team in this game. Look for the Sun Devils offense to struggle and Oregon is going to come away with a blowout victory. Back Oregon against the spread. 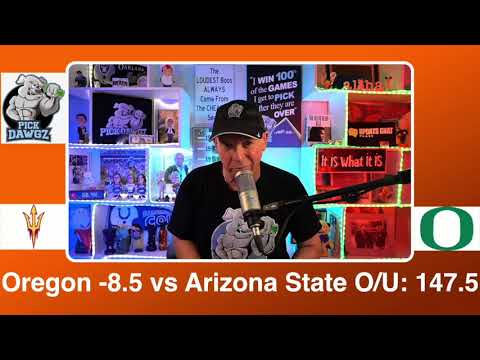