The Long Beach State Beach will be facing the Cal State-Northridge Matadors in the first round of the Big West Conference Tournament. The two teams did not play during the regular season due to the games being cancelled.

CSU Northridge heads into this game having lost two in a row. The finished the season 9-12, and 5-9 in conference play. Last time out they lost at home against the UC Riverside Highlanders by a score of 66-65. The Matadors shot 45.9% from the field but were only 6-22 from three. They had assists on 19 of their 28 makes. TJ Starks led the team with 25 points, while Alex Merkviladze added 13 points and 13 rebounds. The Matadors held UC Riverside to 18.5% shooting from deep. CSU Northridge was outrebounded 42-37, and committed two more turnovers. The Matadors are averaging 72.5 points per game this season, while allowing 77.3 to the opposition. TJ Starks leads the team with 21.6 points per game.

Long Beach State Beach heads into this game having lost 4 in a row and 6 of their last 8. They ended the year with a 5-11 record, and 4-8 in conference play. They lost their last game 73-58, falling to the UC Irvine Anteaters for the second consecutive night. They shot the ball poorly, going 34.4% from the field, 28% from three, and 52.9% from the line. The Beach assisted on 11 of their 21 field goals in the game. Colin Slater led the team with 15 off the bench, joined by Romelle Mansel with 11 points and 9 rebounds. Long Beach State was outrebounded 44-41, and committed 5 more turnovers. The Beach are averaging 72.3 points per game this season, and giving up 79.5 to their opponents. Isaiah Washington leads the team with 14.3 points and 4.4 assists per game.

Both of these teams have underwhelmed this season, getting into a lot of close games but not able to find ways to win. This game will likely comes down to who can shoot the ball consistently. The Matadors have been more reliable, with Long Beach State often struggling from beyond the arc. The Matadors have also shown some grit of late, and I expect that energy to carry over into the tournament. Give me CSU Northridge to cover in Round 1. 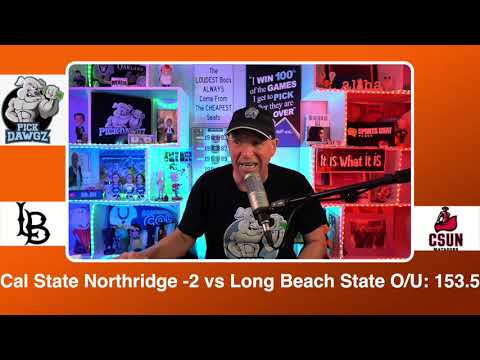