The Iona Gaels and Quinnipiac Bobcats will square off at Jim Whelan Boardwalk Hall in the 1st round of the MAAC Championship this Tuesday night.

The Iona Gales finished their regular season with an overall record of 8-5 and earned the 9-seed in the MAAC Championship after finishing conference play with a 6-3 record. Despite the 6-3 record in MAAC play, the Gaels were given the 9-seed based on the fact that due to having a bunch of games canceled/postponed, they only picked up the six wins in conference play. Iona was solid on both ends of the court this season as they come into this game ranked 94th in scoring offense, 155th in scoring defense, & 70th in defensive FG%. Iona could not pick up a win in their one big non-conference game against Seton Hall, however, this is a team that has played well as of late, winning 6 of their last 8 games including a 2-game home sweep of the Monmouth Hawks.

Defensively, Iona is allowing their opponents to average 69.7 ppg on 41.4% shooting from the field. The Gaels have a rebound margin of 4.1 and a turnover margin of -2.0.

The Quinnipiac Bobcats finished their regular season with an overall record of 9-12 and earned the 8-seed in the MAAC Championship after finishing conference play with a 7-10 record. Quinnipiac struggled a bit on the offensive this season as the Bobcats ranked just 250th in scoring offense & 308th in FG%, however, the Bobcats were able to pick up solid wins behind a defense that currently ranks 133rd in scoring defense & 6th in defensive FG%. Quinnipiac had an up-and-down season when it came to conference play, however, the Bobcats do not come into the MAAC Tournament with a bunch of momentum as they have lost 3 of their last 4 games.

Defensively, Quinnipiac is allowing their opponents to average 68.9 ppg on 38.6% shooting from the field. The Bobcats have a rebound margin of -3.0 and a turnover margin of -1.9.

Quinnipiac was able to defeat Iona at home by a 74-70 margin earlier this season, however, I still think Iona is the better overall team. Quinnipiac has struggled away at home this season as they are just 1-5 in road games and 0-2 at neutral site locations and as I think Rick Pitino and the Gaels defense is going to limit the damage that the Bobcats offense will do, I think Iona pulls away in the 2nd half and covers this mid-range spread. Good Luck! 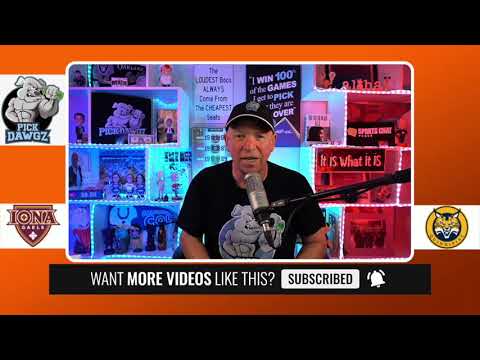